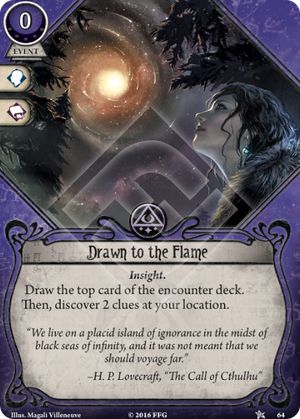 My favourite card of the core set, and what I consider reasonably powerful.

Essentially it gives you 2 clues and most likely some sort of test to pass, but unlike normal investigation effects where you need to pass the test to gain the clues, here you get the clues regardless of the outcome of the test.

Of course you might get an enemy, but it might not that matter if you grab the last two clues from your location and simply move away for a few damage.

I can't see ever using this for the icons, unless there are simply no more clues left to obtain, so the only thing that would make this better would be if it had combat icons perhaps, though it has the icons to match most mystic/seeker cards.

I just wish I could use this card in a Roland deck, but I plan to use it with the upcoming Zoey Samaras

(Reviews are enabled now, so this is a test review)

Kamalisk · 239
Agree on this card. I overlooked it but the synergy with Scrying can't be overlooked. Scry to look at the top 3 of the encounter deck, put the easiest thing to deal with on top, and use Drawn to the Flame. Sure it's two actions to get 2 clues, but at least there's no risk of wasting an action on a failed investigate. The worst case scenario is if you fail a pull on whatever the encounter card is. — PaxCecilia · 324 11/16/16
I'm a fan of Drawn to the Flame. Agnes has many ways to counter or deal with the encounter (i.e. 5 Willpower). Zero cost event and I'm inclined to say this is going to be around for a long time. — Azgadil · 34 11/29/16
If I play #01064 and draw #01173, I take the clue after the resolution of the test ? — Murloc · 1 2/18/17
absolutely love this card, especially with Zoey — csessh · 1 4/15/19
I don't think there is a synergy with scrying. You will draw the other encounter cards anyway. — trazoM · 9 12/3/19
Alyssa Graham sort of combos with this; you can check the top card of the encounter deck to see if it's something you can deal with. Not a particularly strong combo though, I guess. — Zinjanthropus · 212 5/20/20