A sequel to all the fight/evade reduction cards for Exploit Weakness, lets do the same for Shed a Light:

This card is the best for Patrice Hathaway and makes her nearly invincible since she always gets "heal" back at 5 cards during upkeep phase. Moreover, this card can help her utilize useless cards in her hand every round.

Also, if you don't want to deal with Watcher from Another Dimension and are happy with 4 cards each round then Idol of Xanatos can be extremely helpful.

rongcond · 14
You’d have to be in dire straits to be taking that much damage a round. And the moon gem which can be played for zero actions is an even better pick. — MrGoldbee · 1314 1/31/23 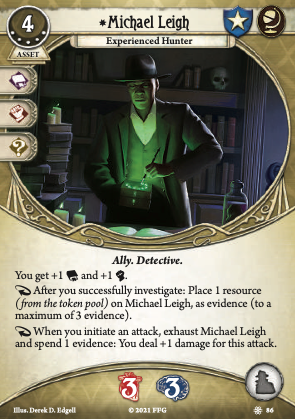 While Michael was printed in Edge of the Earth, he actually seems like he was (at least partially) designed to work with one of the Scarlet Key investigators: Charlie Kane.

He's not bad in other investigators, see the other reviews for that, but he's well worth consideration in the politician. He gives two static boosts and soaks a ton, plus his first doesn't exhaust, so on turns where you're not fighting he just gives you a nice big bonus.

Additionally, because Charlie is limited to only level 0-2 non-Ally cards, it can be hard to find big pockets of damage for him. Events can be one way, but Michael Leigh offers another solution by turning your 2-damage .45 Thompson into 3-damage Lightning Gun. And using Bonnie Walsh, you can potentially get this bonus damage multiple times in a turn when fighting bosses.

While the 5 XP is certainly an investment, I think that players looking for a "fighter" archetype Charlie could seriously consider Michael.

Played this in my latest Harvey Walters deck and it was kinda insane. Since it's a new card, i wanted to test it a bit and see how it is in practice, because i was not very warm about it, but it proved to be very valuable. In the end i had 6xp in it as it was just pure value. I took Refined+Empowered and 5 times i gave my friends 4 cards for 1 action, which is just ridiculous for Guardians or Mystics as they generally do not draw as fast as Seekers or Rogues.

All in all i was very pleased with it, it does bother me a bit that it takes up a hand slot so i could not run my trusted Magnifying Glass + Occult Lexicon, but my group could handle enemies easily so i could swap my lexicon for this, and in the end it proved to be the right choice, since giving my Guardian 4 cards couple of times is enough to make him draw all of his best cards and deal with enemies

Conclusion (beginning with the end in mind)

To me, Alchemical Distillation is an excellent flexible support card when playing in larger groups (3-4p) with significant XP invested in the card (6+) when you can reliably succeed at a difficulty 3 skill test without significant costs (ex: you have a base intellect of 5 and a static +1 boost on Standard difficulty, as "up by three" checks are quite consistent).

For context for my review, I usually play in 3-4p groups on Standard difficulty.

I'm going to start by describing what I think are the top three reasons why this isn't a good card.

First, Alchemical Distillation requires a skill test for getting any of the benefits. If we're looking at level 0 cards to compare Alchemical Distillation to, the current card pool includes several ways to get 2+ test-free resources, card draw, damage healing, horror healing, secrets, clues, and movement. For example, Emergency Cache is a great example of a card for 2+ test-less resources that is still very playable in the current card pool. Using an action for the chance of a benefit isn't as good as a guaranteed benefit, esp. at Hard/Expert when symbol tokens can be particularly painful. Beyond test-free ways of getting benefits, there are also many action-free ways of getting these benefits, such as Crack the Case.

Second, Alchemical Distillation requires a hand slot. Seekers have many excellent options for hand slots. As with Emergency Cache above, the classic Magnifying Glass (0) is cheap, Fast hand slot asset that Seekers are continuing to get excellent value from. Using up one of your precious hand slots with a vial of blue fluid without an immediate benefit is a cost.

Third, Alchemical Distillation provides very little value without investing XP in it. This is certainly a matter of opinion, and for me "more resources" or "more cards" isn't particularly inventive, new, or ground-breaking given the other options available at level zero (per the above points). This is very different for me from Empirical Hypothesis, for example, which is strong and playable into the finale of a campaign without any upgrades. Even liking it as much as I do, I struggle to put it into beginning deck of mine at level 0 rather than playing it as an upgrade down the line.

"With so many reasons not to like Alchemical Distillation, why do you like it so much?" I'm glad you asked!

I believe that Alchemical Distillation has three strong benefits going for it that make it a personal favorite and different from other cards.

First, Alchemical Distillation is reusable. While 3 supplies isn't a particularly large number of uses, you do get several uses in a single card which is significantly more than single-use events or skill cards.

Second, Alchemical Distillation has flexible targeting, namely it can provide a benefit to any investigator at your location. This makes it an amazing team-strong support card. There are certainly other support cards that target other investigators, such as Logical Reasoning (4) and Soothing Melody (via Hallowed Mirror) and Crack the Case, so this card is not unique in this regard. Even so, it's still a strength of Alchemical Distillation, especially combined with the next benefit...

Third, and I think most importantly, Alchemical Distillation is incredibly flexible. For example, it's not the only horror healing card, and it's not even the best team-strong horror healing card, but it can heal horror and give you resources. Or card draw. Or movement. Or a charge. Or a secret. And similarly for the other benefits: it's not the only or best team-strong option, but you get so many different benefit options in a single card. And that's why I like it so much: It's a full toolbox of support and healing in a single card.

Making the Most of Alchemical Distillation

Because I believe that the major benefit of Alchemical Distillation comes from the flexibility of the card options, I believe that taking most (if not all) of the 1-xp upgrades are great options:

The 2-xp upgrade for entering play with +2 additional supplies is a "take it or leave it" upgrade for me. I think it's a great option when you have the xp to spend and you already have other upgrades, and I think Alchemical Distillation is pleasantly strong without +2 supplies. You also have the option of Emergency Cache (3) among other cards for adding more supples if you want that option without putting the xp into Alchemical Distillation itself.

The real upgrade decision point for me comes with deciding between Empowered vs. Perfected. Let's compare the two options:

For me, the majority of the time I'm going to choose Perfected as my key upgrade for Alchemical Distillation. The "succeed by 2 or more" mechanic is more forgiving than increasing the difficulty by two, and providing two different benefits plays into the versatility of the card more than providing more of a single benefit. That said, I think both upgrades are incredibly playable, so if you prefer Empowered then by all means go for it!

"But what about taking both Empowered and Perfected? Why choose only one?" This is definitely an option: you can spend 9 xp to get both of these upgrades. For myself, I usually don't think that this is a good combination for three reasons:

In light of all of the above points, my overall preferred build for Alchemical Distillation is:

Where/When/Who to use Alchemical Distillation?

This is already lengthy, so I'm going to be a bit more abbreviated here. :-)

I find Alchemical Distillation to be most compelling in 3-4p parties because, in general, support-focused actions require a lower proportion of the total party actions on any given turn. Put another way, if I'm one of four investigators and my turn is "play Alchemical Distillation, Activate it, Activate it" then I'm only using three actions of the total twelve actions on support. For myself, I find support actions in 2p games to often take up too many of the total actions unless there's an immediate need (ex: you need the 2 damage healing to avoid possible defeat).

I also find Alchemical Distillation to be most compelling after a couple scenarios because I always want it to have 6+ xp invested in it before I find it to be valuable. Accordingly, build your deck with an idea for this being an upgrade after 2-3 scenarios of xp. After scenario 1 also works if you're okay with rushing it as your primary upgrade.

If you're looking for a specific suggestion, I've really liked playing Alchemical Distillation with Daisy Walker. Her base intellect of 5 is strong for the skill checks. Daisy's Tote Bag reduces the hand slot contention. Down the Rabbit Hole helps with making upgrading it more efficient (though this likely means you're starting with the level 0 version of Alchemical Distillation and not using it for the first scenario).

What do you think?

Thanks so much for reading this review! Let me know what you think of Alchemical Distillation in the comments.

SocialPsientist · 138
I've been playing Vincent with a 10 xp Alchemical Distillation in our blind Scarlet Keys run; and I've been having a blast for the reasons you describe. It's hard to spec heavily into support in Arkham horror while staying effective, but a high-xp Distillation is one good way to do it. Although, as you did touch on in the review, Distillation is probably a much less attractive prospect on Hard and Expert. — Spritz · 66 1/31/23