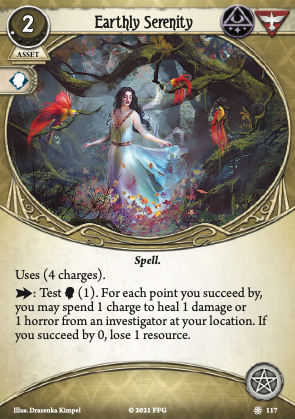 This card really steps up in value when you play it with Dexter Drake. For 1 resource and 1 action, you can heal up to 4 damage/horror. Pretty powerful stuff. And then next turn you can throw it out for a Shrivelling and load up on horror all over again :D

If you have Showmanship down, you'll get a +2 to the test and be likely to spend all your charges in one go, even without any other Willpower boost. 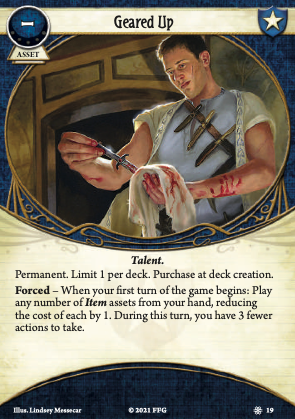 I will try to elaborate on the interaction with Backpack, and why it might or might not work.

This permanent creates a forced reaction, much like a the optional reaction skills on many cards, that allows you to play Item assets during its timing window. Backpack does its thing after it entered play.

The second viewpoint is directly countered by the 'Ability' rules, under triggered abilities, stating "A [icon] ability with a triggering condition beginning with the word "after..." may be used immediately after that triggering condition's impact upon the game state has resolved.". The Geared Up ability affects the game state. Therefor I conclude that Backpack only gets items after the Geared Up ability is already done.

I would argue that Schoffner's Catalogue does work with Geared Up, since there is no mention "after.." or any triggered ability.

Anyway, I still like it. If you have an item heavy deck, playing 3+ items at a discount is great!

Weges · 18
I don't know, where you got the quote about the "impact upon the game state". The RR in the version on arkhamDB states: "The word "after" refers to the moment immediately after the specified timing point or triggering condition has fully resolved." Backpack triggers "After Backpack enters play", so I would say, if you play Backpack with "Geared Up" and afterwards other cards, the timing point, when you could trigger Backpack's ability had already expired. — Susumu · 178 1/10/22
I am in the cannot play the items inside backpack with geared up camp. From the reading, geared up ability just triggered once when the first turn of the game begins. It is not a continuous effect. Which is unfortunate but maybe a higher exp version might be different. — FateACG · 1 1/11/22
As I know, the main issue is not this as written in this review, but whether playing occurs simultaneously or one at a time. If playing occurs simultaneously, backpack is triggered after playing chance is gone; if playing occurs one at a time, we can play items in backpack. — elkeinkrad · 262 1/11/22
Notice that Ever Vigilant clearly states "one at a time", but Gear Up doesn't. — elkeinkrad · 262 1/11/22
@susumu: This would be the case if the wording would be "then.. ". It's a subtle difference, but it determines whether things happen during another effect or after the whole effect that enabled the trigger. Take Dr. William T. Maleson for example; Imagine if the when was an after instead. Then that effect would make no sense, as the encounter would already have been draw and all effects of it resolved. — Weges · 18 1/11/22
I'm not entierly sure, that you can play items out of the Backpack, either. But what I am sure is that, if you can't and you don't play it as the last item, it will wiff triggering it's ability. If it would have a "then" printed on it, this would simply mean, that you can't play it earlier in the round at all. (Which you likely won't do in this case anyway.) Because it would need to trigger the ability. I also don't think, "Ever Vigilant" being a good referenc. There had been cases on inconsistent wording (sometimes clarifications added, sometimes not) on other cards in the game. But as I said, I'm not entierly sure, if you can use Backpack, then play other cards from it, myself. Honestly, I don't care that much, because I think, it is a trapcard either way. — Susumu · 178 1/11/22
I'm sort of with Susumu and sort of against. Until official ruling I am leaning towards "you can use backpack in the middle of playing items as part of the forced step" just because if you can't the card is clearly a trap, and I'd rather have a card that does something than one that doesn't do anything :-P — NarkasisBroon · 1 1/11/22
I don't think, it actually matter that much. You normally would just play the Backpack as last card and can trigger it then just fine. Regarding the question, if cards are played simultaneously or one at a time, I think, it is entierly impossible to play cards simultaneously, because playing cards is always an initiated sequence, you have to check play restrictions, determine and pay the cost(s), ect. This can't be all done simultaneaously for all cards. Unlike for example "drawing cards", where the RR explicetly states, that if you draw multiple cards, they are drawn simultaneously. — Susumu · 178 1/11/22
You could probably argue, that the backpacks reaction triggers when it enter the play and not when it was played. — Tharzax · 1 1/12/22
Weges, I diagree with you. I thik that if the when of Dr. William T. was an after it would be much better, because the when means you do not know what card is, after means you know what card is. I certainly think you can use backpack. Gear up is saying that at the moment of your first turn begins you can play cards. It is not an event card like ever vigilant that have a limited time. — condedooku · 1 1/17/22 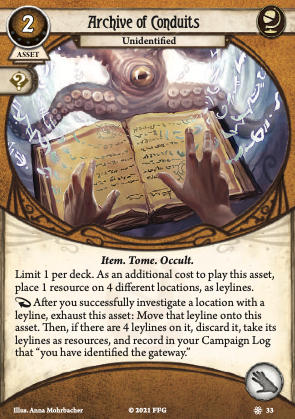 Doubt: Do I need to "record in the campaign log" to upgrade? The upgraded versions don't specify it. But they have the "researched" text, and I don't find reference to that in faqs or anywhere (maybe I dunno where to look). Thanks!

EDIT: Found it, I was looking in the Edge campaign guide, and it is in the Investigator's :)

Laerthes · 1
To help others with this question: Researched is a new keyword version of the "unidentified"/"untranslated" mechanic. A card with Researched can only be included in a deck by upgrading from a lower level version, and only if you or another investigator in the campaign has written something in your campaign log using an ability found on that lower level version. — Thatwasademo · 42 1/10/22
(so, in this case, as you would expect, since Archive of Conduits (Unidentified) allows you to record that "you have identified the gateway", in order to get any of the level 4 versions of the card you must have "you have identified the gateway" recorded. It doesn't matter who does it. — Thatwasademo · 42 1/10/22 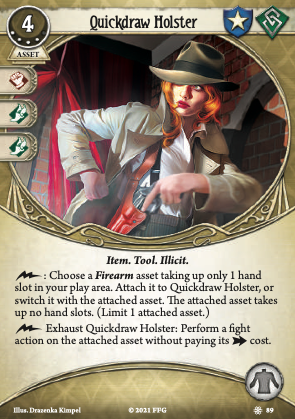 How does this affect the "spend one ammo" part of the cost? Do I have to pay the ammo because the Holster only affects the actual action cost or all of the activation costs? 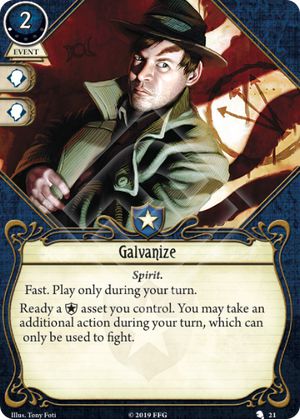 This with Quickdraw Holster gives you three attacks for the price of none!

200 Characters filler text: Lets me think about playing Nathaniel Cho with a gun in the holster and his gloves on. Somewhat funny to imagine him fiddling frantically first to get the gun out of the holster, second struggling to pull the trigger and all that twice in a row. Maybe the enemy is damaged just by watching the process in agony. 200 characters done.