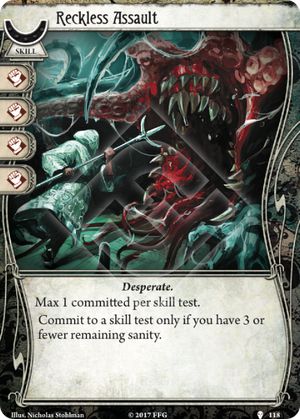 For the right investigator, this lineup of cards is fantastic. Getting a lot of cards that wait around until you take some damage is counter-intuitive in many decks, so you can never take more then a couple, three at the very most. This is especially true if you got a nice stash of Sanity to tank through before triggering these cards, but what about the low sanity investigators? Roland, Skids, Lola, Mark, Yorric, Zoey and especially Ashcan can fairly reliably expect to put these cards to good use, relatively early.

At 5 sanity, Roland and Mark can bet on gettign these cards into play quickly, which makes Reckless Assault and Say Your Prayers very good for them.

Reckless Assault because turning horror damage into fight potential is extremely effective (Give Fight or Flight a chance, it's awesome). Say Your Prayers because it's like a bulwark to hide your dwindling sanity reserve behind.

My favourite investigator to use desperate cards with is "Ashcan" Pete. He has 5 Sanity so he can reach that breakpoint as fast as Roland can, but he has the added safety of Duke to hide behind, and then his repertoire of useful desperation cards is bigger too. Desperate Search links with Duke to become a whopping 8 strength investigate check, or a 6 strength test to follow up the regular Duke test and secure the second clue on a difficult location. Run For Your Life isn't half bad on him either since a 7 value evasion attempt is very nearly guaranteed success against most foes. Also, Ashcan has access to Mystic cards, Rite of Seeking and Shrivelling being obvious targets for Say Your Prayers.

Finally for Ashcan, if the desperate card is burning a hole in your hand, just chuck it at Duke.

As a final note, I find Desperate cards to be the perfect placeholder for an upgrade, especially if you intend to take some permanents. Gonna get Scrapper or Keen Eye immediately after scenario 1? Well Physical Training or Hard Knocks is probably gonna become a dead draw and who knows if you'll even manage to make use of them in the first scenario anyway? Try some desperation cards instead! My route of choice for "Ashcan" Pete? Scrapper after scenario 1, then replace the desperation cards with Will to Survive.