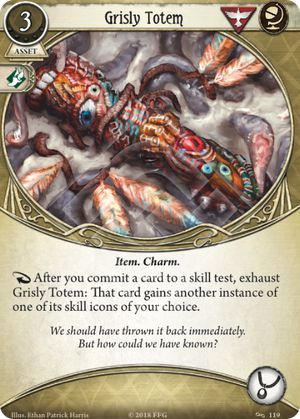 Grisly Totem is a funky card, it's good, but funky. Not an autoinclude even in the relevant decks but an interesting pick still.

Buffing instances of skill blips is a flexible but intermittent bonus, sometimes you just don't have the relevant icon or cannot spare a particular card on tests, however it's unlikely that you cannot muster cards for skill tests at all for rounds on end. The trick is to have a good set of expendable cards and skill cards to go with a Grisly Totem. It's very much like Minh's ability except you need to draw, play and pay for it.

Skill cards, while not required with Grisly Totem, really make it shine. Getting 3 skill pips for a Perception, Manual Dexterity, Overpower or Guts is really cool, more meaningful though are the 1-pip cards that are flexible, you can play Rabbit's Foot alongside Grisly Totem and essentially use it like an Unexpected Courage, an interesting prospect if you also have access to Scavenging and routinely chase clues (it gets real good when you get Relic Hunter). Even more usefully though all the variety skill cards like Resourceful, Eureka!, Inspiring Presence, Quick Thinking and so on, all of these become MUCH more interesting and effective when you can treat their icons as 2's instead of 1's.

While characters tend to have skill cards all over the place in terms of , , and , and therefore might flexibly use the bonus on what's needed, characters tend to have an overabundance of cards and a strong inclination to chuck them at tests rather then play them, this means that a might have less flexible things to do with a Grisly Totem but they can often get more use from it, which is great because unlike dudes there is very little competition for the accessory slot.

When you do trigger the bonus, you often trigger it on top of some pretty clutch tests, a Guts versus a Rotting Remains, any play of Deduction or Vicious Blow, Stunning Blow, you get the picture, it's pretty good.

If you have lots of skill mechanics in your deck that's really when Grisly Totem becomes a priority. Silas Marsh and Minh Thi Phan should take note, they are the perennial "ALL THE SKILLS!" characters with 50% percent of their decks being skill cards, so should "Ashcan" Pete, Roland Banks and Joe Diamond, all of whom tend to bulk up on cool skill mechanics like Deduction, Vicious Blow, Eureka!, Resourceful and/or Inspiring Presence.

This is theorycrafting. A review from somebody with experience running this card will provide better insight.

The first names that popped into my head while reading this card were Minh Thi Phan and Silas Marsh. It enhances what they want to do normally. I don't know what else is competing for relic slots for them (Cherished Keepsake? possibility to add Key of Ys later?), but this seems really strong for them. An auto-include unless I'm missing something. The typical Dark House "Ashcan" Pete deck would benefit greatly from it.

Otherwise, it just depends on a) how many skill cards are you running (I know it works on any card, but a skill card is the ideal option), and b) what relic cards you are running. Like most assets, it gains value the earlier you play it. Maybe that's good enough to test it with Dr. Elli Horowitz and run a lot of skill cards. Seekers in general have access to good skill cards. It also works nicely with wild skill icons. On the Survivor side, Dark Horse decks can utilize it.

The biggest weakness of this card is the one-time use limitation. You're only getting one extra icon per turn (I'd imagine this makes it worse on harder difficulties, I only play standard). You also have to have a card to commit that has the correct icons on it. You can limit that weakness through deckbuilding. One extra icon seems weak, but you are already adding icons with the card you are committing.

It's hard to say if this is a deck-defining card like Dark Horse (outside of Minh and Silas), but it should be a decent amount of help if you're going to run lots of skill cards anyway (and/or cards with good skill icons).

bigstupidgrin · 6
It's not unique, so you could have two copies out. As for Dark Horse Duke, I've played various builds a lot. I find if a card costs more than 1, it just ends up getting discarded as Duke food. — cb42 · 23 3/22/19
Correction: Two copies out with Relic Hunter. — cb42 · 23 3/22/19
The OP seems to be confusing the Accessory slot with the Relic trait. (Probably because "Relic Hunter" gives an extra Accessory slot.) But, yeah, this card *isn't* a Relic, and so *doesn't* synergise with Dr. Elli Horowitz. — Yellow_Peril · 1 3/26/19
I'm not fully sold that "a skill card is the ideal option", as you normally play skill cards to shore up weaknesses (e.g. get from 3 to 5 skill) or cycle them (overpower for making that fight test pass unless you draw an autofail) , so most of the time, 1 extra icon does not matter much. — Shakiko · 3 4/5/19
There are plenty of excellent 1-icon skill cards, like Eureka, Resourceful, Quick Thinking, and Double or Nothing. — Katsue · 8 4/17/19