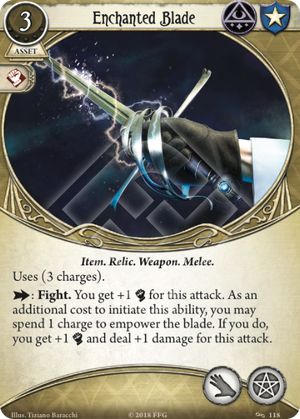 This card is a much more appealing option with the recent release of the Limited list, and may become the Level 0 weapon of choice for Guardians (at least for players who choose to apply the optional Machete changes). It's cheaper and arguably better than the .45 Automatic (one less damage-boosted attack, but a higher bonus to and continued marginal utility after the charges have been used). Mark Harrigan will still probably prefer the .32 Colt, but most other investigators with access to the Guardian card pool may prefer the all-around goodness of the Blade.

Note also that its Relic trait gives it great synergy with Dr. Elli Horowitz (another beneficiary of the Limited list thanks to the optional Dr. Milan Christopher change). I'm experimenting with a Dr. Elli/Relic package in a Joe Diamond deck (including Tooth of Eztli to ensure consistency with Dr. Elli), and so far the results have been very promising. It sort of operates as a Prepared for the Worst with a net cost of 0 and an extra sanity soak that puts the tutored weapon directly into play. It thins the deck and frees up hand slots for other key Seeker items (Magnifying Glass, Hawk-Eye Folding Camera) until Joe can find his Detective's Colt 1911s.

Solution: for use swords charges, you should use "head" instead of "fist". Only guardians with high "head" could use it optimally in this way.

Sisvel · 8
Yeah I'm not a fan of guardians using magical items (at level 0 at least), flavor-wise. You have the mirror too though, so that might become more common. If it was a niche card I'd be OK with it, but it's the best guardian 0 weapon... — jd9000 · 38 2/14/20
I actually agree, I think the level 0 version is slightly too good, and it awkwardly came out right when Machete got taboo'd. Arguably this is better than Machete, but there's no competition between them for taboo players since Machete costs XP and this doesn't. I think for now it would be worth un-tabooing Machete and seeing how they fare against each other. I do like the upgraded versions of both cards in how they synergize with what their respective class would want. I think magical items are fine... as upgrades or rare items like the Mirror. — StyxTBeuford · 1338 2/14/20
I do understand the criticism, but this is not better than 45 lvl 2. It's cheaper to play by one resource but also has fewer charges than the 45 has bullets, can't easily be reloaded by guardians, doesn't ignore retaliate and takes up an additional slot. Granted, some of these are fairly marginal advantages for most guardians, but they do exist. — Sassenach · 114 2/14/20
Ok, It's possible that 45. automatic level 2 has marginal advantages. But with a cost of 2 xp... Not compensate, in my opinion — Sisvel · 8 2/14/20
On the other hand, the Enchanted Blade can still be used even without charges (for a +1 combat boost, good for finishing odd health enemies where you'd otherwise need to spend an ammo), costs 2 less XP, one less resources, has a better commit icon, and let's be honest takes up an extra slot Guardians do not care about at all right now. Ignoring Retaliate is decent, and particularly cute with Diana, but other than that I definitely think E Blade 0 edges out the level 2 .45 auto. Let — StyxTBeuford · 1338 2/14/20
Of course different weapons can be better or worse in certain campaigns, so there's arguments for level 2 .45 in certain contexts, but in a vacuum I think it's a really easy choice. — StyxTBeuford · 1338 2/14/20
I think the ability to replenish the ammo in the 45 makes it the superior choice most of the time. The +1 boost to finish off odd health enemies is nice I guess, but for most guardians it's not that big of a deal. Punching for 1 damage is liable to be almost as effective. — Sassenach · 114 2/14/20
Although I would say that EB lvl 3 is vastly superior to 45 lvl 2, and if I were inclined to take the upgraded 45 it would be better to spend 1 more xp and get the better weapon instead. — Sassenach · 114 2/14/20
The issue here is that the machete exists. If the devs want to create a weapon that competes with the machete (such as EB), they're naturally going to invalidate every other weapon in the game. — flamebreak · 2 2/23/20
The only big downside to the Enchanted Blade with Guardians is that they can setup an Extra Ammo/Venturer ammo resupply for their other guns but this is pretty much as strong as the L2 .45 Auto. A Guardian will need at least 4 weapons so both have a place in the deck. The one huge benefit in favor of Enchanted Blade is during Carcosa with those pesky ghosts. Of course, Dunwich benefits non-melee weapons like the .45. — TWWaterfalls · 452 3/4/20
Nothing thematically says Guardians shouldn't have access to some magic. It exists in their world, of course they would find ways to use it. — Tilted Libra · 8 6/6/20
4

I am looking forward to trying this card out. While it's still no Machete, I think that this could be a good second weapon for a lot of Guardian investigators.

Let's get one thing out of the way - this card does take up 2 slots, which is not really great. However, most investigators that aren't Mystic investigators don't end up using both of their arcane slots anyway, so the arcane slot requirement for Enchanted Blade isn't super prohibitive for them. That may change going forward as arcane slot assets become more common for other classes.

I think the best way to measure this card's effectiveness is to look at it compared to some other level 0 Guardian combat options:

Ultimately, I think that Enchanted Blade is most at home with Guardian investigators who will want to use it as a pseudo-Machete until they get their real Machete out. I think that Enchanted Blade can also be used as an off-hand weapon to cover some of the blind spots of the Machete - specifically, when you're engaged with more than one enemy or you need to deal more than one damage to a monster not engaged to you.

I think that most Mystic investigators are going to not get quite as much use out of this card, as their arcane slots are more valuable and they generally tend to avoid tests. It may be situationally useful for them, though.

My conclusion for now is that, as of the time of its release, Enchanted Blade is a pretty good card and I think it will see some use as the non-Machete extra weapon for Guardian investigators.

ArkhamInvestigator · 216
For level 0 Akachi this can be Shriveling #3&4 for consistency. It has a slightly better cost to charge ratio for her and attacks just as accurately without Rosery. Given that we know this will have a leveled up version, we might reasonably see this as part of a consistent combat focused Mystic package. — Death by Chocolate · 14 3/15/19
Seems like a great addition to Zoey right now — Malgox · 12 3/15/19
It looks like a great card in off-class guardians. — Tsuruki23 · 1068 3/18/19
With so few charges, I dont think tis that good in a Main fighter, rather with the extra +hit and cheaper cost this weapon loends itself to switch hitters. — Tsuruki23 · 1068 3/18/19
It's a more flexible .45. I think it's worth the slot over the .45 in most decks. — Myriad · 714 3/22/19
Tried it in a Roland deck and liked it a lot. It was a bit like having 4 machetes or 4 .45s, which let me have an option that was slightly better than machete more consistently. — SGPrometheus · 224 3/22/19
Jim Culver might want this instead of the Fire Axe, depending on resource consumption. It just stings a little to have to use an off-faction slot to use it. — cb42 · 23 3/22/19
Jim doesn't use out of faction slots for these. — Myriad · 714 3/23/19
When you empower the blade do you get +2 fight +1 dmg in total? — Zuntir · 516 3/24/19
I think the most relevant thing on this card is the Relic trait. — Tiktakkat · 31 3/26/19
In campaigns where you need a Relic to harm certain enemies, it is going to be almost mandatory. in campaigns where you don't, especially where melee weapons might not be as good, then it won't be as impressive. — Tiktakkat · 31 3/26/19
My poor fiends, you've forgotten the best user for this weapon: William Yorick! He doesn't care about charges, he just replays them from his discard pile! And it's a good and thematic for a Mage/warrior Akachi! — mogwen · 159 4/13/19
I thought using a charge only gave +1 Damage to the card? I should look at the FAQ.... — Krysmopompas · 14 4/20/19
You get an additional +1 fight if you empower and would do 2 damage. — Myriad · 714 5/7/19
Can be good for Carcosa, where you have to deal with Poltergeists — alexvicegrab · 1 1/16/20
I don't like this card. I have 2 reasons 1. This card is unthematic. Why guardians can use a magic blade? I don't understand. They should use fire arms, knifes.... no magic blades. It's more, guardians use magic blades better than mystics. No sense. 2. This card is unbalanced. Compare it with .45 automatic level 2... is better than 45 level 2!! that cost 2xp. I don't talk about 45 level 0...A good weapon, but obsolete because exist this enchanted blade. Solution: for use swords charges, you should use "head" instead of "fist". Only guardians with high "head" could use it optimally in this way. — Sisvel · 8 2/14/20
@Myriad Jim Culver does use an off class slot for this. If you read the rules for dual class items, it states it takes up a secondary class slot, even if you have the main class. — Tilted Libra · 8 6/6/20