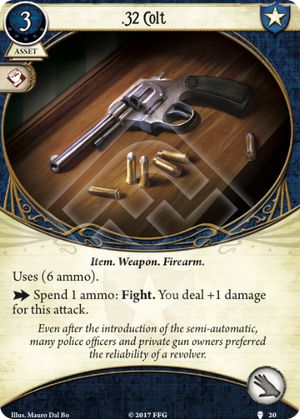 "The saddest part is that co-operative games don't get balance updates" -Tsuruki23's review of .32 Colt.

Not anymore they don't! With the introduction of the Taboo List, which was introduced after Tsuruki23 made his review, Machete has been yeeted out of the 0xp pool, giving other weapons, like the .32 Colt, a chance in the spotlight. That, plus the introduction of .32 Colt (2), means it's time for a re-review:

First, this gun might as well be renamed Harrigan's .32 Special. Arriving in the same expansion that the Colt came in, The Soldier doesn't need boosts to and the Colt doesn't provide them, instead putting that value into being a cheaper, longer lasting gun than the .45 Automatic. Mark can feasibly carry this gun late into a campaign and still find reliable use for it.

Second, if your an investigator with 3 or less , you can forget about including this card. So Carolyn, Skids, Jenny, Culver, Diana, Ashcan, Rex and Lola don't want this card.

As for investigators with 4, Zoey Samaras, Leo Anderson, and Tommy Muldoon can probably pass on this weapon, as their in-built resource acquisition or access to rogue cards means they can afford the more powerful weapons with less uses, such as .45 Thompson, .45 Automatic, and Enchanted Blade. That leaves three investigators that might consider this card: Roland Banks, William Yorick, and Joe Diamond.

Third, if you're including this card in your deck, you should heavily consider "Eat lead!" (and it's upgrade). Eat lead's downside is more severe the less ammo in the firearm you're using and the more boosts the firearm provide when attacking. Guess which gun has the most ammo and the fewest boost?

And that's about it. I wish I could go into more detail about how, in my opinion, William Yorick is the second best investigator for including .32 Colt, but I'll leave that for a deck description, rather than here.

EDIT: Also include Warning Shot, with the same justification as "Eat lead!".

The thing about this gun is this:

The reason you get this rather then Machete is because you're not always just fighting a single foe and a rare few foes reward ranged weapons over melee.

The annoying thing is that the opportunity cost of playing this over machete is scarcely worth it. The +1 to hit is a dealbreaker.

Maybe if there had been an alternate fire mode, something like:
-> Spend 1 ammo: FIGHT. You gain +1 (Strength) for this attack. This gun would be flexible enough to compete with the best non-xp weapon in the game.

The saddest part is that co-operative games don't get balance updates, which means that this card is condemned to uselessness until some blanket-effects (a character and/or investigator card) are introduced.

Revision: Now that "Eat Lead" is going to be a thing, this gun just got it's "Blanket-effect" buff.

Tsuruki23 · 2275
In Guardian guns aren’t meant to compete with Machete, they’re intended to complement it. There will be times (esp in multiplayer) where multiple enemies are engaged with you and the reliable +1 damage only becomes more — Difrakt · 1146 12/4/17
Important in those situations. Also, you shouldn’t discount the fact that melee cards are intentionally counterbalanced by certain enemies. — Difrakt · 1146 12/4/17
I enjoy using the .32 with Mark because he doesn't always need the extra +1 to hit. Also, it can be a waste of actions to engage an enemy off of another investigator just to get the +1 to damage with the Machete. It can be more efficient to use the .32 Colt to attack an enemy engaged with another investigator than to engage it yourself and attack with the Machete. — YourGo · 2 12/4/17
Easily the best 0xp gun out there. So I wouldnt be so quick to condemn it. — aramhorror · 649 12/5/17
Agreed re: Mark - the .32 Colt was made for him. And the Machette's single enemy requirement for the +1 damage is no small thing when you're getting swamped. — AndyB · 902 12/16/17