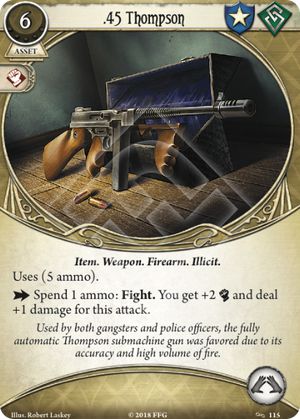 So I quite like this card for it's ability on Standard to largely supplant Beat Cop (0). Don't get me wrong, he's a good guy but he doesn't perfectly solve the problems of each fighter at level 0.

6 is usually enough for all but the most dangerous of checks on this difficulty, and while it prevents you from keeping your off-hand free for Flashlight to help on clues there are alternatives. You can also just play some Perceptions if you have >3.

If you're at 4 like all Guardians (at this time) besides Carolyn Fern and Mark Harrigan, here is your one card answer to getting up to that magical break-point.

I like it in Zoey who doesn't just grind her economy to a halt by playing it, but I've grown quite fond of it already for Tommy. Becky is cheaper but requires more hoops to get the remaining 3 bullets, and is already a 2-handed weapon. There's not quite the same level of considerations other Guardians face when deciding if they should commit to a 2-handed weapon at 0 XP.

Also for these two it sets them free from the binding chains of Beat Cop, Zoey has amazing options in Leo De Luca and Peter Sylvestre, while Tommy can use Guard Dog to great effect. Like Leo Anderson he can also use Alice Luxley to help out on clues since you're not bringing a Flashlight.

It's not quite the set and forget ace that Enchanted Blade (0) is--mostly due to the ability to get +1 even when you don't need to spend a charge--but it's a fantastic stand-in until you grow up big and strong into a Flamethrower or some other nonsense.

I can’t find the image for this card elsewhere right now, but I think it actually has 5 ammo. So the comparison to .45 Automatic is quite favorable in my opinion. In comparison, the .45 Thompson costs 2 more resources and the second hand slot and gives you 1 more ammo and an additional +1 combat for each attack. I think this is actually much better than the .45 auto, especially for characters with less than 4 base combat like "Skids" O'Toole and Finn Edwards. Another comparison that can be made is to Baseball Bat, which costs 4 less but whose durability is less predictable (is expected to break ~50% of the time by the 3rd hit though). Of course, 2 handed weapons require some planning, but many ’s and ’s are already prepared for this in leaving room for Flamethrower or Chicago Typewriter. This card is notably the best level 0 weapon target for Sleight of Hand.

jmmeye3 · 213
I don't agree it is that good on rogue investigators like Skids or Finn. Taking 2 hands is huge, and means you won't be able to use the powerful Lockpicks. Which means, it has to go in a deck that doesn't want to gather clue, and so focus on fights. At this point, i'm not sure Skids or Finn is the best take, since they are pretty low in willpower, so they may not be the best investigator focused in tank / killer. It could still go as a 0xp version of Lupara... But only if there are more than 3 ammo ! xD Otherwise, it's not going anywhere. — Palefang · 44 3/1/19
Here's a link confirming that it has 5 ammo: — jmmeye3 · 213 3/3/19
https://www.reddit.com/r/arkhamhorrorlcg/comments/as9yrr/new_card_spoiled_on_facebook/ — jmmeye3 · 213 3/3/19
It is also worth mentioning that this card loves act of desperation. — Myriad · 652 3/4/19
Carolyn Fern can take it. And with Keen Eye would be rather good with it. — Tiktakkat · 30 3/5/19
With Streetwise Rogues still have fairly good chances of gathering clues without the need of Flashlights and Lockpicks. While I agree that they shouldn't be the primary clue gatherers with this setup (but who said that a Rogue should do that?) With this card and 2 Chicago Typewriters they can effectively replace Guardians while still being efficient at evading and gathering clues. — Killbray · 1 3/9/19