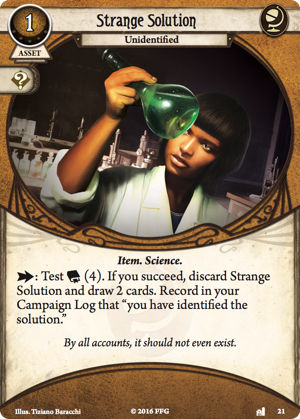 This is, hands down, the best card in the game (currently released, as of 2/23/2017). Identifying the solution is very often the difference between winning and losing, and including 2x in your deck (mandatory in the current meta) can ensure that you identify it twice in a single game, which is just incredible. It seems reasonably costed at 1, though I'm kind of surprised it is level zero. It seems to me that the card is at least level 1, if not 2 or higher.

clydeiii · 37
You got me confused. I really don't know what will happen later on in the campaign after you get to write down that you "have identified the solution" and plz don't spoil it to me (is it even clear yet what it does?) But if you think this card is great because of the card draw, i'm afraid you're mistaking. Testing it succesfully gains you 2 cards.... to get to test it you have to use...... 2 actions (1 action to play it, 1 acton to test it AND the test has to be succesfull) In other words, its even less efficient compared to using actions to draw. So maybe the consequences of getting to to write down in the campaign log that you have identiefied the solution will be great, but the card draw is crappy. — Heyenzzz · 4705 2/24/17
O yeah.... and you have to pay 1 resource to play this asset.. So plz don't use this card as a card draw engine. — Heyenzzz · 4705 2/24/17
If you could repeat the test to draw 2 cards, this card might be useful, but not like this. Like laboratoy assistant, this card is a trap. — Django · 4146 2/24/17
After reading the review again.... i think either @clydeiii is just kidding or I just fed a troll with mij comment.. lol. — Heyenzzz · 4705 2/24/17
He's half-trolling. We have no idea what "you have identified the solution" means. That's kind of the point of the card :D — mowglie · 31 3/11/17
The one upside I find on this card is the wild icon! Playing it with a Rex scavenging deck, and with the lack of great items to pull out, it's hard to turn down a skill icon for anything sometimes c: — Ettecoud · 1 4/17/17
how well this review has aged. — Fuzer · 1 1/1/19
Just to clarify for new players reading this review who may be confused by the comments: later packs have multiple upgrades to this card based on if you identifies the solution, and at least one of those upgrades is VERY good — Mjev89 · 1 3/19/21
Thank you for the clarification Mjev89! I was wondering about that haha — ChicoGuava · 1 1/17/22
Further clarification for even newer players reading this now, who got this card in the Dunwich Legacy Investigator Expansion: back in the old days, card packs trickled out in a monthly release, and this was the first ever 'unidentified' card (there weren't explicit rules about it at the time), so NOBODY had any idea what identifying it meant, and we wouldn't find out until several months later, while most of us were in the middle of playing the Dunwich Legacy campaign! — Death by Chocolate · 1131 3/24/22
3

I'm shocked that the only review for this card is basically a joke.

Strange Solution is a fantastic card for Seekers, perhaps another example of how the designers seem to greatly favor this class of investigators. For the cost of a single test, which still draws you two cards, you gain the ability to upgrade the Strange Solution to a powerful asset that can answer any problem that exists in your team.

I'd like to also note that each of the upgraded Solutions can re-supplied with Emergency Cache (4), although that is a pretty heavy investment for Seekers, who have a LOT of options to spend their XP on.

The level of the identified solutions (4) does prevent any Investigators other than Seekers (and Monterey Jack, the Seeker in disguise) from taking this.

Judicator82 · 15
Yeah, many people in this community have started seeing Seekers as problematic and clearly too strong. This card is another example, even tho it came so early in the game, Strange Solution (4) Acidic Ichor should not exist in this game. When you desing the game where you win by getting clues, and stop — Blood&gore · 84 3/17/22
Continued : and stop the players from getting clues by throwing other stuff at them, it is okay. But if you give the main class that wins the game by doing what is needed tools to win the game in other ways like defeating enemies, best draw, best search etc. then you are creating a very unbalanced faction which clearly can do it all. Why then play the other class? — Blood&gore · 84 3/17/22
@Blood&gore for fun? But yeah, you're right. Seeker shouldn't have more powerful damage dealing cards than any other faction. — Nenananas · 207 3/17/22
@Nenananas It's a good thing that they don't have such cards, then. — TheNameWasTaken · 3 3/17/22
Yeah. Compare Cyclopean Hammer, available to both Mystics and Guardians: a mere 1 XP and 4 resources more for optional enemy-movement, a nice additional partial success window (say you have total Combat+Willpower 9, not hard for either class to reach - you would then have the same odds of dealing 3 damage as Acidic Ichor, only on a few token draws that would make the Ichor fail you still deal 2 damage), and, most importantly, *never running out of supplies*, which is absolutely vital in a large group and really nice for all but the fastest solo characters. — Thatwasademo · 42 3/19/22
There are far too many times when I've assumed "eh, I'll be fine wandering away from the dedicated fighter, I've got Acidic Ichor / Blood Rite / whatever other Seeker damage effects" and then the game has the nerve to deal me an enemy *two whole turns in a row* and I'm suddenly struggling — Thatwasademo · 42 3/19/22