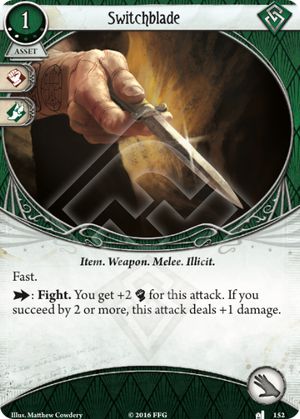 I've had the privilege of trying the upgraded Switchblade in several games recently, and it is a really neat weapon. It's got the good points of the basic one - it's fast, so you can get it played in an emergency quickly, and it's cheap. However, it's got +2, so you actually stand a reasonable chance of doing extra damage.

Basically, it's like a .41 Derringer, but fast, cheaper, and not limited for ammunition. Compared to one of my other favourite weapons, the fine Machete, it's cheaper, a bit more likely to do damage, but more chancy about doing extra damage. It's also still useful if you're engaged with more than one enemy.

The only down side - it costs 2 XP. Each. It's a bit of an investment of experience. But otherwise, it's probably the best weapon available (as of the Essex County Express). "Skids" O'Toole and Jenny Barnes are both awesome with it. Something like a Beat cop would fit nicely too, making that extra damage just a smidgen more likely. It's likely to be my weapon-of-choice for rogues for a while...

BEST WEAPON IN THE GAME this weapon is so strong that it is envied by the guardians. It costs practically nothing (1 resource), it gives you +2 in strength and if you are strong enough you will also have +1 additional damage! Rogues generally have a lot of agility and high intellect, but if you have at least 3 strength and your investigator is keen to fight, you will be obliged to choose this weapon.