Mysterious Stairs is connected to the locations above and below it.

"So worn and narrow were the steps, and so greasy with the ooze of inner earth, that the climber never quite knew when to expect a breathless fall and hurtling down to the ultimate pits..."
– H. P. Lovecraft, The Dream-Quest of Unknown Kadath 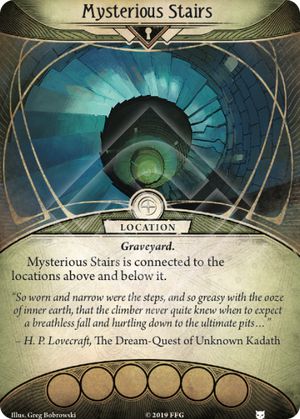 Mysterious Stairs is connected to the locations above and below it. 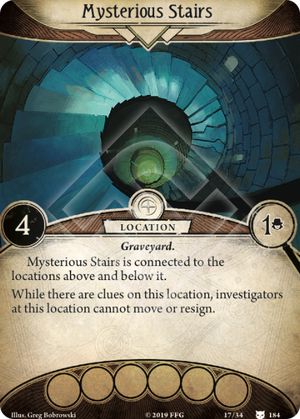 This is the worst luck-based bottom location in multiplayer.

We (4-player group) had to wait for another Endless Descent draw to push the scenario forward. If we ran out of those and this location was our last then srsly, this would be annoyingly broken :D

Vigerus · 26
While its annoying, you can just investigate to remove its effect. In fact you'd need to do it either way even if you do draw an endless descent since you can't move out of this location without gathering the clues. — madhatter152 · 5 5/23/21
I believe what Vigerus might be referring to is that when one resigns, by default they put all their clues on their location. Which means depending on how many clues each of your gators has. That would make resigning on this location extremely problematic. The "resign places clues on your location" rule so rarely matters that it's frequently forgotten, even by the designers I think I'm some cases. For example the resign location in "the house always wins" is victory. But managing to get that victory point without being defeated requires serious shenanigans :-P — NarkasisBroon · 1 5/25/21
A week ago, I got this location (after Endless Descent) to be in the bottom. First resigning investigator would drop few clues to the other one, making it impossible to resign there (shroud is quite high, cannot get clues in time). I just ignored the drop clues on resign rule here, seems too much punishing... — johniez · 3 5/25/21
Especially frustrating here is that they have the technology to fix this from other scenarios: Just make the Resign action take your clues and return them to the token pool (or put a forced effect that takes them when you're eliminated). — Thatwasademo · 41 5/28/21