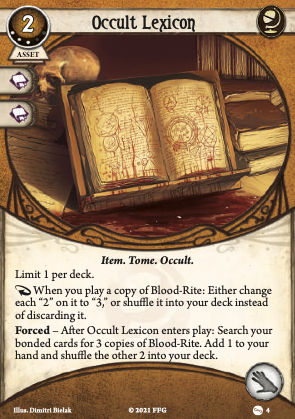 This seems like a good upgrade if your seeker can cycle their deck quickly to redraw them after shuffling them in. The potential for an extra point of damage could be useful for odd-hp enemies, and if not needed you either get to keep an extra card or get an extra resource.

Also of interest is that this card has lost the text "When Occult Lexicon leaves play, find each of those copies of Blood-Rite (even if they are out of play) and remove them from the game." I think this means you can now swap the tome out after playing it and still keep the Blood-Rite cards in the deck. You don't get to use them as powered up versions, but replacing it with a better hand item might be worth the trade.

I'm just sad that Marie can't take this and she is the only investigator right now where I would consider this right now. Three testless damage is pretty great though, many Solo/duo Seekers might like the upgrade.

If this card cost 10 exp, then it would take 19 exp to buy 2 Ancient Stone and this card. That would still probably be a bit strong for a 19 exp deck. So maybe this card should cost 10 exp.

sharpobject · 1
11 XP for up to 18 damage for 9 card and 9 ressources seems not too strong for me (this combo blocks also both hands). — Tharzax · 1 5/25/22
I don't understand your math. if this card cost 10 XP, it would take 18 XP to buy 2 ancient stones and this card... Also, you'd have all of your XP in three cards, so you wouldn't necessarily get it into play quickly and consistently. — Death by Chocolate · 1170 5/25/22
You're right, it's only 18. I can't edit my comment though. You can use Whitton Greene to dig for these cards and play a character who draws an extra card each turn anyway such as Amanda or Harvey. We've found this sort of build for Amanda to already be gamebreaking with Occult Lexicon (0). — sharpobject · 1 5/26/22
The problem card here is Ancient Stone and not Lexicon. Seeker combat tools are intended to be potent but fleeting, expensive, or both. You can occult invocation ONE person to death and then your unsafe, or you can acid weak enemies but need commits for harder ones. Stone is easy, safe, repeatable, and cheap, with the most automatic damage of any single card in the game if you go for a high shroud location. — dezzmont · 122 5/26/22
imagine the fun of a shenanigan using black market to get double double in play in addition to lexicon (3) + ancient stone. That would be 12 testless damages (Harvey even more) in one action if I count correctly. — liwl0115 · 33 5/26/22
@liwl0115 Black market doesn't draw cards, it just reveals them and allows them to be played - so it has no synergy with ancient stone. — snacc · 786 5/26/22
@snacc you would play double double under your control using black market and so it synergies with blood rites which trigger ancient stone. — liwl0115 · 33 5/26/22
it's the same idea as using "You owe me one!" to play an asset under your control — liwl0115 · 33 5/26/22
Oh right, I misunderstood. I thought you were referring to Black Market as an additional synergy with Lexicon and Ancient Stone, but you were meaning it as a way of getting Double, Double into play. — snacc · 786 5/26/22