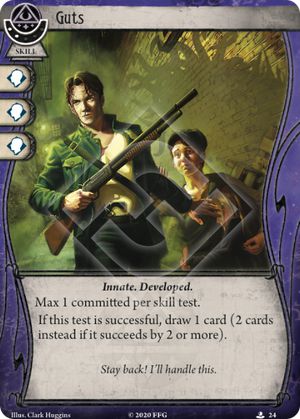 I am not sold on this suite of 2XP upgrades to the Level-0 Neutrals, but, apparently, a lot of people love them. I can admit that Mystics are not exactly swimming in card draw, and a chance to get two cards for a fairly easy test on any of the "first upgrade utility spells" (Shrivelling (3), Azure Flame (3), Rite of Seeking (2), Wither (4), etc) would be helpful to most Mystics. Once you are testing 10, getting 2 up isn't that hard.

Edit: On review, Silas can take this and might very well like to to shore up his kind of shaky .

LivefromBenefitSt · 882
I am with you on not understanding the attraction to this set of cards. The card draw is nice but in most of the classes my investigators are testing high enough that I don't include the L0 version. Yes, it gives you card draw but I would rather have the other better cards in my deck in the first place. — TWWaterfalls · 832 9/15/20
So typically, if I am testing one or two stats very frequently, I usually include the level 0 versions of these skills. All my fighters take Overpower, all my cluevers take Perception, etc. They have always been good cards and I think people have shifted to underplaying them. They just increase your consistency and help you cycle into your best cards faster. These upgrades are just more gas in that tank. — StyxTBeuford · 12689 9/15/20
I also typically focus on boosting 2 skills for each investigator but one I focus on boosting only with static boosts. The other I focus on boosting with wild/skill icons. And I could get L2 skill card but usually I would prefer to add the L2+ card that boosts itself like Rite Of Seeking (2). I could see myself using the Overpower version because I usually always have extra combat icons in my deck since failing a combat test can turn things ugly very quickly. Most of my Mystics decks are testing at an 8WP by mid campaign and I barely include any skill cards in their deck anyway. — TWWaterfalls · 832 9/15/20
I’m not particularly excited about most of the cycle, although I find them interesting. I particularly value Perception (2) and Overpower (2) because they add more powerful gas to Practice Makes Perfect. — Death by Chocolate · 1105 9/15/20