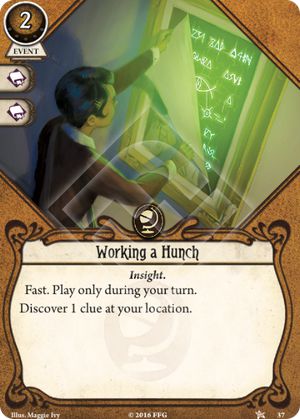 This is a pretty good card. However, I think Seeker investigators with high might sometimes want to pass on this card to include cards that are more urgently needed.

Getting one free testless clue is amazing. However, this card is in a faction that will often have the best chance of testing for clues, so it's providing a one-time solution to a problem that Seeker investigators can regularly solve anyway.

In my opinion, it is better for Seeker investigators to build an engine to consistently get clues rather than playing one-off cards to get clues every so often (Cards like Dr. Milan Christopher, Magnifying Glass, etc.). When you can usually spend one action to get at least one clue, spending 2 resources and a card to get a clue is a little less enticing.

Roland Banks really likes this card, especially if he is on his own. He often wants to focus on playing cards that support fighting, since he can use fighting as an alternative means to get clues, but this card lets him get a clue even when no enemy is around. He particularly likes using this to crack high-shroud locations which would usually give him some trouble with his base of 3.

I think one of the best uses of this card is in Joe Diamond's hunch deck. Because it's fast and the 2 resource cost is discounted to 0, it's essentially free, and it's easy to play because there's normally a clue around to pick up somewhere.

I think this is a good card. As I said before, a fast, testless clue is almost always welcome. I think that most clue-finding focused investigators may pass on this card to make room for other options, but I think other investigators should give it consideration.

It's a testless clue, fast, for a reasonable price.

This card is flat amazing. Anybody who can afford the cost and doesn't emergently need to draw something more important will directly contribute to winning the game with this card. Doesn't care about shroud, doesn't care about enemies. This is an absolute staple.