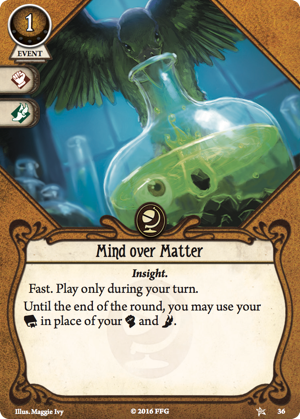 This card is for Daisy Walker - bookish girl, not good at sports - until you play this card and she becomes "Xena - Warrior Princess".

It turns her poor 2 strength and 2 agility into 5 for the turn! That's monstrous! Tack on Dr. Milan Christopher and you've got 6 strength and 6 agility. It's fast, too, so you've the full 3 actions still to use (plus a tome).

It's main disadvantage is it's brief effect. It only lasts for your investigator phase, so save it until you really need to evade or clobber something.

"I've got a plan" does do something similar - but only for a single Fight, and it costs a lot more. If you don't need to deal that much damage, or you're looking to run away, Mind Over Matter is the card for you.

Rex Murphy, with his lower intellect and higher agility, doesn't gain as much from this card. To be honest, I'm a lot more ambivalent about it in a Rex deck.

And yes, for most other investigators so far, it offers nothing. But still, for me, this is the first card I add to a Daisy deck.

For added giggles, look for any other items that can boost intellect too.

Good card for Daisy Walker and Norman Withers, reasonable on Minh Thi Phan too but Ursula Downs and Rex Murphy don't need it or have better options.

The higher your intellect can go the better Mind over Matter is, thus it synergizes with Dr. Milan Christopher and St. Hubert's Key, both cards are good and frequently taken on Norman Withers and Daisy Walker. The maximum potential Mind over Matter buff is 7 and for a round which makes you a fearsome warmachine much like Fight or Flight does for characters.

The good thing about this card is that it isn't much of a "combo", you're just tapping into stats that are already making you good at other stuff that you really need to be doing. Do consider bringing a simple weapon however to make proper use of this large buff, Knife is perfect in this role since the discard mechanic means that you eventually get the hand-slot back to fill with a Magnifying Glass.

Finally, it's just an entertaining play. The Scrawny smart-person hulking out and knife-fighting down a bunch of Ghoul Minions or karate chopping a boss is just plain fun.