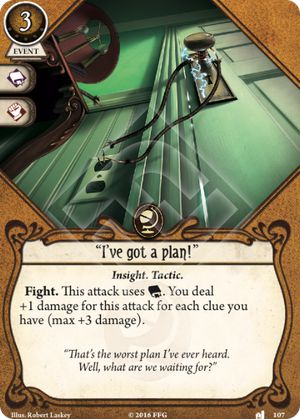 characters generally struggle with combat, mostly because of deckbuilding restrictions and class-wide scores of 2 or less. Any of them can mount respectable defense via toolbox cards like Knife but overall a will not be able to kill any sort of major enemy, ranging from Ravenous Ghoul and Hunting Nightgaunt to Umôrdhoth itself.

Typically you leave these enemies to someone else to kill or try to avoid them, but this kind of defenselessness isn't always viable even with a friendly face like Mark Harrigan in the party, there is an upper limit to how much damage a character can do in a round and sometimes you'll find yourself engaged with a big threat at a time where the other guy has something more important to do or is just outright busy with a danger of his own (such as having this carcosa dude and that other carcosa dude spawning simultaneously).

This is where "I've got a plan!" comes in. Hitting routine attacks is an issue for decks, even Shrivelling is only so accurate without something like Higher Education to boost it, but mounting one big attack by chucking all of those unused little icon cards that typically gather in your hand is a very reasonable bet. Boom, one hit and you've killed the 4-hp threat you just drew or contributed 4 points of damage to the boss.

"I've got a plan!" has it's weaknesses, your sustained combat ability is still not great, you need to draw it and you need the clues, but its a high-yield attack in a class thats otherwise bereft of good combat options. This is pretty much an autotake in every deck whose Investigator isn't the upcoming Joe Diamond.

Tsuruki23 · 2348
In a group with a dedicated combat character, I found this card to be dead weight in my hand more often than not. Expensive dead weight. In my last Carcosa run (playing clue focused Rex), I didn't even consider taking it, and I didn't miss it one bit. — cb42 · 33 1/30/19
There is also the risk that the moment when you need this is at the start of a new Act when you have little or no clues. I generally compare this card against Mind Over Matter - which takes more actions since individual attacks only deal 1, but is cheaper and much more versatile (can also be used for dealing with locked doors and other treacheries) or for evading enemies. On a high Agility seeker like Ursula though, I might be more inclined to take the reviewed card, but I definitely don’t see it as an auto include. Of course, team dynamics is a big factor. For example, I play almost exclusively three player with a dedicated monster fighter, dedicated clue getter, and a flex character. — Death by Chocolate · 1256 1/30/19
Mind over matter is more of a panic button, while this cards needs some time to prepare. As other said, it's useless if no clues are available. It's also rather expansive, compared to other seeker cards. I like it as additional combat option, but ususally "upgrade" it with the acidic strange solution. — Django · 4426 1/31/19
5

This card is pretty cool because it is a seeker card that actually lets a seeker fight for real, landing a gigantic blow that can defeat a 4-health monster in a single action.

However, this card is very, very undependable. Unlike Mind over Matter, you absolutely cannot expect this card will be usable when you need it. It isn’t a big deal for most seekers to pick up 3 clues when they are available. Unfortunately, most scenarios don’t let you keep those clues, they force you to spend them in order to move to the next Act. So you can’t use this card at the start of the mission, you can’t use it right after advancing to the next Act, you can’t use it when you are still trying to find the place where the clues are located or otherwise busy dealing with something before you can collect clues, you can’t use it when the Act requires you to spend clues a few at a time as soon as you collect them, and you can’t use it during the many Acts that don’t involve collecting clues at all. And when you do have a lot of clues, it is not uncommon that you are on a roll collecting clues and would rather collect more and end the Act, rather than go off and fight a monster. There are definitely plenty of times you can use this card, but a lot more when you can’t.

On top of that, the card is quite expensive for a one-shot event and you need to be willing and able to spend the money on it. And while you hope you have enough Lore and other cards to hit the target, that may not always be the case, especially if your base Lore isn’t 5. And it could be embarassing if you miss since you likely have no other fighting abilities.

To summarize, this isn’t really a self-defense card that you can hold in your hand and rely on to get you out of trouble. It is more of an extra card you throw into your deck so you can occasionally do something awesome.

Why does this use the language, "uses ," instead of the more common language, "uses instead of " (for instance)? It came out after Shrivelling and Rite of Seeking, but before Blood Eclipse, which all use the replacement language. It's probably just an oversight, but I kind of wish FFG had opted into this cleaner, but perhaps more confusing, language for all these effects.

Potentially a very powerful card in the right hands. Rex Murphy with Dr. Milan Christopher and Magnifying Glass can attack with a strength of 6 and potential damage of 4 - and for 3 resources this is well worth it.

JoolzG · 2
Note that Magnifying Glass only provides its intellect bonus while investigating. Regardless, "I've Got a Plan!" is still a powerful card that fills a gap in Seeker decks. — Herumen · 1652 3/10/17
Agreed. Unless I have this in hand or Mind Over Matter I usually don't feel comfortable going out on my own, but these two cards can put you at ease and would suggest running at least one of them if not both for the Seekers at the current time of this post; that can always change with new released cards of course. — Bronze · 171 5/1/17
Magnifying glass won’t help you much, because you only get the bonus while you are investigating. — Timster76 · 7 12/8/17