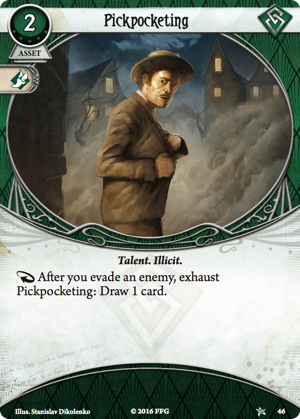 Strong contender for the very worst card in the game.

is the money faction, but that doesn't mean that you have money to spare.

Cards are a bit better then resources, but even so this card is incredibly expensive for what it does. When you play it you pay: 1 Action to play it, 2 resources and the card itself (The opportunity cost). Replacing this you could have brought Manual Dexterity/Overpower/Perception/Guts and played it on a test as a non-action, netting you the card for no money and no actions that you aren't already taking.

Perhaps by the time you've got the fourth trigger off-of this card you'll be breaking even on the huge commitment, cost and opportunity cost, perhaps, or maybe you could have just saved yourself the trouble and spent two or three actions to draw the cards you needed at a fraction of the cost.

Note that this doesn't extend to the rather effective 2xp version Pickpocketing, the saved action and overkill bonus combine to ensure that the card pays for itself quickly. The saved action is especially big since now you don't need to spend the resources and action up until the exact moment you know they will count. Oh and the extra icon isn't bad for those moments you decide you can't play it.

Tsuruki23 · 2275
I'm curious to see how it works out in a Finn deck. His extra evade each turn should theoretically counter the tempo hit of putting this card out. I'll be running it in a 4-player multi game, so I imagine there will be plenty of enemies on the table to evade. — micahwedemeyer · 54 3/4/19
I tried Pickpocketing lvl 0 in my multiplayer Finn deck in TFA and it seemed decent. Eventually you'll probably want Pickpocketing lvl 2, but the lvl 0 version suffices if you think there are more urgent upgrades. Because of Finn's extra evade action, Pickpocketing level 0 in Finn seems pretty comparable to, say, Lucky Cigarette Case. — iceysnowman · 158 12/24/19
I strongly disagre with this review but I think reason this reviw was lacking because it is 2 years old? I think pickpocket is very good in a deck where you got cards that benefit from evading or cause evasion. — Makaramus · 5 12/22/20
I agree with Mak. This is a staple in my Finn (who also loves the 2xp version) and Trish decks, and it's just as good in anybody else who has high agility. Or anybody that can take for a run through TFA. — Dicegods · 1 1/17/21
If you use Versatile, this is a good card for Rita Young to pocket. — Krysmopompas · 290 2/16/22
0

Even removing exhaust part away. this card would not even be close to broken.

might be wrong since I'm starting new with a new format but that's my bold opinion on this card so far.

The fact that this card trigger with Evade, Evade Action which is not a useful action or progressing action just multiplying how bad it is.

I'm about to build some deck base on this card but just realize it has to exhaust too so project closed.

Pawley · 10
The problem this card has is, you will never get your investment fully back, and it really only supports evoiding — Therealestize · 43 4/23/22
*avoiding enemies, which in campaigns like the forgotten age, is good. But most of the time, taking out the target is better. Mind you, the upgrade is fantastic. — Therealestize · 43 4/23/22
I disagree that evading is generally bad. Especially in 3 or 4 player games its a critical tool. While core+Dunwitch evasion support is bad, evasion has had a huge glow up in the last 6 years, with pure evasion strategies being very potent. Pickpocketing (0)'s problem is more that you are getting very little for playing it: 2 resources is about a card, and it costs an action you could use to draw to play it, meaning it puts you down 3 cards in a class that really needs to maximize power via resources or cards. Pickpocketing (2) is amazing however because its both fast and amps up the payout considerably to the point it may be the strongest single card engine in Arkham. — dezzmont · 128 4/23/22
Yeah, you are way undervaluing Evade as a tactic. I was once much like you, but I built a "evade and go fast" Ursula deck, and it was a blast. Ursula and Rita make a ridiculous pair for most campaigns, cutting through scenarios like nobody's business. Finn is also awsome at enemy management and clue-getting, likewise Trish. dezzmont is correct that evade was pretty second tier until Carcosa, but it's only gotten better with time. All that said, Pickpocketing (0) is pretty marginal, except maybe as a placeholder for Pickpocketing (2). Finn is about the only investigator who can get use out of the basic version, and he usually has better things to do with his card slots. — LivefromBenefitSt · 910 4/24/22
I taked this card with Trish during the time travel scenario. I got it on my starting hand and evaded a lot during the scenario. I would take it again since it nets me surely 5-6 additional card over the scenario. — Tharzax · 1 4/24/22
Thanks for opinions! I'm starting new format eote and tdl so I do not know those card yet but definitely looking forward to. And even recently I start to get the gist of game design. most of investigator who benefit from draw would likely be Survivor class. which often use hand as resource instead of normal resource. — Pawley · 10 7/3/22
I agree this card has gotten better over time. There are scenarios where evading enemies is the preferred way of dealing with them. Examples include the vengeance mechanic and mini-bosses that never truly die. In a vacuum this card may seem bad, but its practical for investigators who already want to evade like Finn and Trish. The card is fine and I wouldn't judge someone for running it. — SpicyNugy · 2 8/23/22