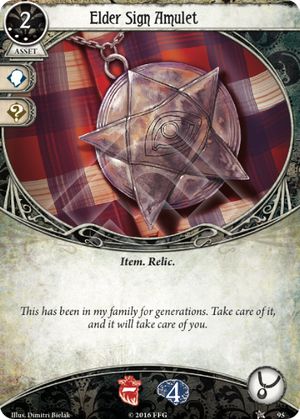 I don't think that these protective cards are getting enough love. It is hard to consider for three experience (along with Bulletproof Vest), but I think that these are definitely worth the purchases. I tend to lean towards including Elder Sign Amulet in Roland Banks's deck and "Skids" O'Toole's deck since they have such low sanity values that this can effectively double what you can sustain throughout the adventure.

You have to consider that the slot it is consuming is likely not even used. In my Roland Banks deck there is an absence of accessories. So, when adding this in there is no conflicting option to worry about when you draw it. It is never a dead draw card. Especially with the symbols that it comes with. Cards meant to keep you alive are not typically the fun cards, but they are the ones that get you the additional experience in the long run to survive and make it through the campaign and get the cards you really do want later.

Bronze · 108
SPOILER LAST SZENARIO: With this amulet and a beat cop, roland survives 3 (without "dodge") turns of attacks from the last boss, which can be enough for the rest of the team to win. — Django · 2637 12/18/16
Your opinion values a lot! I prefer solo playing using Rolan Banks, however it always ends up taking too much horror during the game and he is often defeated by insane. I think this item really helps player to keep low sanity characters going into next adventure good and healthy. — Anjack · 1 1/8/20
2

Hey guys, just a heads up, this is still a fine card.

I have a hard time spending XP on purely defensive cards, but in terms of sheer horror tank value you can get in a single action Elder Sign Amulet is undisputed champion.

Many powerful heals require 2+ actions, First Aid for example which gives Bulletproof stiff competition takes 5 actions to get full use out of (and is limited). Elder Sign Amulet is 1 action for a whopping 4 more sanity to work with, there is no other card in the game that nets you so much sanity in so little time.

The action efficiency is important, lots of characters scramble for actions. In solo, actions are your most precious resource. If you're trying to multitask clues and combat in a team, you definitely don't have actions to spare! In a team where you're the key performer in a particular role (the only killer, the only cluer). Elder Sign Amulet is a go-to card for the characters who have sanity trouble but no actions to spare.

Obviously the exact same is true for Bulletproof Vest and health.

Officer Pawterson costs 2 less resources and prevents 2 less pain, I don't see either card as being better, being free makes the card better in certain decks, worse in other decks.

Key of Ys is nice for horror tanking, but Key of Ys is less a card you use for tanking than it being the side-effect of using Key of Ys for massive buffs. Heck, grab Elder Sign Amulet and use it to cover your Key of Ys.

The only card that completely overwhelms the Elder Sign Amulet is Deny Existence, where preventing any trigger of 2 horror effectively nets you as much tanking as the Amulet would but for 0 actions and no cost while also being there if you have trouble with other stuff.

I know that this is probably not a fair comparison, but I think that interest in Elder Sign Amulet will probably decline now that the Key of Ys exists. They both take up the accessory slot, are both neutral, have the same skill icons, have the same horror soak, and have the same Item and Relic keywords, However, for 1 resource and 2 experience more the Key of Ys gives you a really powerful effect. It's really hard to justify spend 3 experience on this when you can get the Key for 2 more experience because it's almost always worth it.

The advantages Elder Sign Amulet has over Key of Ys:

Key of Ys is so similar to Elder Sign Amulet that if you asserted that the Key of Ys was originally slated to just be the level 5 version of Elder Sign Amulet, I would have been inclined to believe you. Of course, saying that this card is a worse version of what many would argue is the best card of the game isn't really an insult. This is a relatively well-balanced card and I think a lot of people considered it as a reasonable source of horror soak in the core set. However, I think that going forward it will be hard for people to take this card without thinking "maybe I should save up for the Key of Ys instead..."

ArkhamInvestigator · 216
Very true. But even Higher Education doesn't look so good when Key of Ys is setting the bar... — CaiusDrewart · 1767 9/13/18
In 4 Player this Card is a very good Horror soak for most guardians. — Django · 2637 9/15/18
One downside Key of Ys has over Elder Sign Amulet is that you can't use it to soak a lot of horror in a single turn. Ideally, when playing Key of Ys you want to place on it 1 Horror at a time to get the most benefit out of it. That means that if you want to soak a lot of horror on a single turn, its ability will probably go into a waste. Your approach on getting Key of Ys instead of Elder Sign Amulet is interesting, but if all I'm looking for is horror soak, then I'd rather spend 6 XP on 2 Elder Sign Amulets than 5 XP on a Key of Ys. — matt88 · 1723 9/16/18
@matt88: I just don't think that's right. There is absolutely nothing wrong with playing a Key of Ys and then dropping 3 horror on it right away. In fact, that is pretty much ideal. (The game almost never deals more than 3 horror in one go, anyway.) — CaiusDrewart · 1767 9/16/18
@CaiusDrewart If you do that, then 1 point of horror kills it along with the top 10 cards of your deck and you will probably not enjoy your increased Stats for long. I agree that getting +3 to all skills right away is pretty powerful but you 're in danger of losing the bonus any time. And if you 're playing in the Dunwich cycle you are also in great danger of getting killed by Beyond the Veil once your cards get discarded. — matt88 · 1723 9/16/18
I don't think Key of Ys is the card you want when rampant horror is your problem. As good as that card id, a 2 cost accessory that prevents horror is a far better anti horror option then a 3 cost accessory that you like to dump as much horror on as you can get — Tsuruki23 · 1071 9/17/18
@matt88 @Tsuruki23: Just play the Key of Ys with some other horror soak (like an ally, which is surely something you wanted anyway), and these concerns basically go away. A Key of Ys can provide essentially all the benefits of an Elder Sign Amulet while also being immensely more powerful. — CaiusDrewart · 1767 9/19/18
@CaiusDrewart Wait a minute. I thought that when assigning horror while you have Key of Ys in play, you must assign 1 of that horror to Key of Ys regardless if you have other assets that have Sanity or not, because "you" refers to your investigator in general and not your investigator card. Is this correct??? — matt88 · 1723 9/20/18
Nope, it means your investigator card. So if you have other quality soaks in play, you can sustain a 3-horror Key of Ys for a long time. That's one reason why many people (myself included) think Key of Ys is grossly overpowered. — CaiusDrewart · 1767 9/22/18
Then, that's amazing!! — matt88 · 1723 9/23/18
I have a personal house rule: Key of Ys doesn't exist. — crymoricus · 202 1/10/19