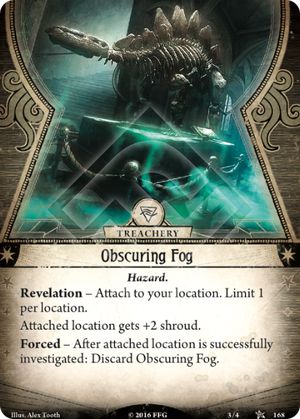 Just wanted to take a moment to appreciate how rarely this card screws you over. So often it spawns on a location that's already out of clues, or had none to begin with, or even already had a copy of fog on it, so does absolutely nothing. The only problem with that is that it stays out of the deck so it's not around to provide you with any more dead draws in the mythos phase, Its worst case scenarios are blocking a high shroud victory point location, and even then it's about worth a perception or flashlight charge. Adds +2 difficulty to something the seeker is already doing, and doesn't even block you from picking a clue.

I suppose it's a lot worse in higher difficulty levels, and it does block the strategy of flashlighting a location down to 0 shroud. But even in those scenarios, you have all the methods for picking up testless clues that you can just save for when this gets attached to a location.

Overall, I just can't think of any treachery that's shown up in a nail-biting mythos phase where certain cards will just force a loss, that gives as great a sigh of relief when it shows up instead of those. Though perhaps that's just because it's in so many levels.

SSW · 155
Eh, it's not much of a roadblock for a dedicated clue-getter (unless you draw it an an already high-shroud location), but I've had plenty of scenarios where a non-clue focused investigator suddenly finds a VP location outside their grasp or other frustrating nonsense. It's notlikely to tank a scenario, but it can cause some tempo damage. — LivefromBenefitSt · 835 2/2/21
Great draw for Roland. If you can First watch this and a monster onto yourself, you're in business. — SGPrometheus · 604 2/2/21
Although Roland's ability won't discard the fog, since he isn't investigating, so it doesn't solve the problem for multiple clues. — LivefromBenefitSt · 835 2/2/21
heh heh I hadn't noticed it specifically but you're right- almost any time I pull this from the encounter deck, I'm relieved. — HanoverFist · 455 2/4/21