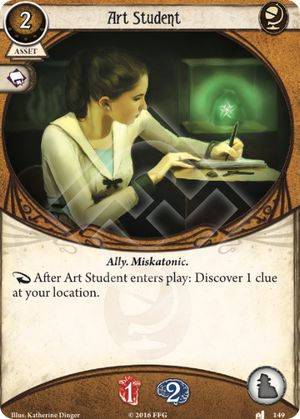 The Art Student is cheap, has 2 Sanity (so she can soak at least one Horror before she dies) and she will instantly discover a clue at your location upon arrival. If you're feeling generous you can always consider her an auto-success Investigation action for 2 resources, with a free meatshield included.

But there's two problems really. The first is that Art Student is a Seeker card, and Seekers are quite good at finding clues. They really shouldn't have to pay 2 resources for a severed tentacle when they can find one for free. They also often get benefits from investigating, benefits this card wont trigger. The second problem is that Seekers have far more attractive allies - Dr. Milan Christopher for example.

"But!" I hear you say, "I can play the Art Student first and then discard her when Dr. Milan shows up!". That's fine and dandy, but what if you have already played Dr. Milan when you draw the student? Then she's just a +1 Knowledge skill card, silently mocking you from the safety of your palm.

"Charisma! I can include Charisma in my deck!" you clamour. Well, you certainly can, but as they say in Kathmandu; "you'd be paying the baker for the benefit of a horse". It's simply not worth the trouble.

olahren · 2488
Art Student is a good sanity shield in Roland. — Chobabot · 1 7/27/17
Including Charisma just for the Art student would really be overkill, but Charisma lets you have a bunch of meatshield allies while still having one with a meaningful ability. And that is worth it, I think. — TheNameWasTaken · 3 7/27/17
Huge bonus for Hard/Expert: She avoids the Chaos Bag. (And still a decent bonus on Easy/Standard) — miggydoh · 84 8/4/17
a "working a hunch" on legs. Same ability, with added damage/horror soak, but that will occupy the ally slot. — Heyenzzz · 5279 8/18/17
7

This card is very similar to Working a Hunch - they both do the same thing for the same cost with a few differences:

So, Art Student effectively costs one more action than Working a Hunch, provides some soak, but takes up a slot that could be prohibitive to playing other useful cards. In-class, I don't know if Seeker investigators will take either, since I think they'd rather put their resources towards playing assets that will let them gain clues over and over again rather than getting a one-time clue. Sure, Working a Hunch will help you get one clue from a high-shroud location... but how are you going to get the rest of them?

I think most Seeker investigators are not going to be interested in Art Student as an Ally option. Dr. Milan Christopher is generally the preferred choice for clue gathering as a flat +1 with resource generation is overall a more useful set of effects than gaining a single clue.

However, I think Art Student is a good ally for Roland Banks. Roland's is lower than most main-class Seeker investigators, so he likes having the testless clue option to crack high-shroud locations. He also has low sanity, so the 2 points of horror soak are welcome, especially in an ally that can be discarded without too much consequence. Roland's other main ally, Beat Cop, definitely adds a valuable +1, but it's twice the cost of Art Student and Roland is usually spread pretty thin on resources.

I think there's a good way to build a Roland Banks deck without Beat Cop, and I think in those builds Art Student is one of his better choices. There is some minor synergy with Calling in Favors and Laboratory Assistant where you can use the allies for their "entering play" effect, have them soak one horror, then return them to your hand so that you can use their "enter play" effect again. Roland Banks likes these smaller, cheaper Seeker allies for horror soak.

So, while Art Student isn't necessarily the best card, it definitely has its uses. In decks that count on the occasional testless clue and want cheap Seeker allies for horror soak, I think it's a reasonable choice.

ArkhamInvestigator · 278
Art student is a cheap soak and great target for calling in favors( together with laboratory assistant. — Django · 4426 9/7/18
For Roland, I think I'd go with Scene of the Crime and "Let Me Handle This" to pick up clues at a high-shroud location. I'd say Dr. William T. Maleson is also a stronger purchase for 1 resource - better damage-soak, and the ability to drop a clue is helpful for dealing with Cover Up. — sfarmstrong · 258 9/10/18
@Django - I agree, Laboratory Assistant and Calling In Favors let you get more out of Art Student. It really helps with the card draw, horror soak, and clue-gathering. — ArkhamInvestigator · 278 9/12/18
@sfarmstrong - I see what you're saying with Dr. William T. Maleson. For 1 resource, you get very good horror and damage soak, and his ability does help a lot with Cover Up. However, with Maleson's ability being so important for Cover Up, I think he's less expendable than Art Student (and so Roland might be hesitant to use him for his full soak value). I also think that Roland's best version is probably "Dirge of Reason" Roland (if you have the books) and I think that benefits a little more from Art Student than Maleson (since Mysteries Remain is itself another testless clue gathering card and has the potential to drop a clue on Roland's location to be picked up, and Cover Up isn't looming throughout the scenarios). Scene Of The Crime and "Let me handle this!" are definitely both good Roland cards, too (and to be honest, a testless-clue Roland build might take all 3 cards). — ArkhamInvestigator · 278 9/12/18
4

This and Mysterious Raven need to be reconsidered with Charlie Kane. The biggest knock against this card (takes up an Ally slot for a one-time use) is not an issue, as Charlie has 4 slots. And unlike other investigators, Charlie can still use Art Student after it's played as a +2 boost. Furthermore, there is no opportunity cost for doing so—unlike say Lola Santiago where if you exhaust her for the boost, you can't use her ability.

The other consideration is that Art Student and Raven are cheap. As much as I'd like to dream of an all-star Gené/Grete/Lola/Peter lineup, that's a lot of resources and Charlie's going to need some cheap allies in his deck to balance (and shield) the more expensive ones. For that purpose, an ally that automatically picks up a clue when played isn't bad. And nothing says "Politician" more than a person who uses interns to do his dirty work (and as shields against monsters attacking him).

MindControlMouse · 14
Calling in favors is really good with these type of cards. — Therealestize · 47 6/26/22
It does seem like seeker/survivor will be hard to beat. AS and MR are only further enhanced by A Chance Encounter. Might even be worth running Short Supply, though that's trickier to say. — Maseiken · 1 6/27/22
Remember that he can run allies of all classes. You don’t have to choose seeker for the students. — Django · 4426 6/27/22