Mitos
Plan. Stage 1
Doom: 6. Clues: –
Despite Ichtaca's warnings, you've entered the ruins of the temple in search of ancient knowledge and artifacts.

*This agenda gets +1 doom threshold.

Forced - When this agenda advances: Do not remove doom from each location in play. 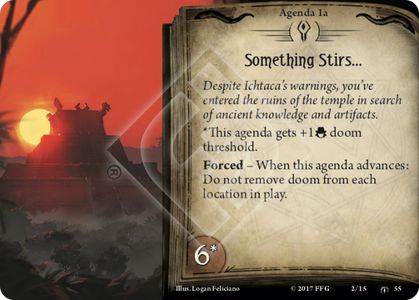 The Ruins Awaken - Back

Plan
Just then, a sound thrums in the walls of the temple, a dull humming similar to that of a generator. Grooves in the walls and the ceiling flicker and start to glow. It is as though the temple is alive, and it senses your presence. The strange statues and carvings you've seen, coupled with the dim glow and the power coursing through the walls, makes it clear that this temple isn't Aztec in origin. In fact, it appears to be from an even older, more ancient civilization altogether. You feel as though you are an intruder in a world you cannot begin to understand. Confirming your worst fears, a loud hiss and rattling echoes throughout the temple. Whatever you just woke up, it's not happy to see you.

Spawn the set-aside Harbinger of Valusia at the location with the most doom. 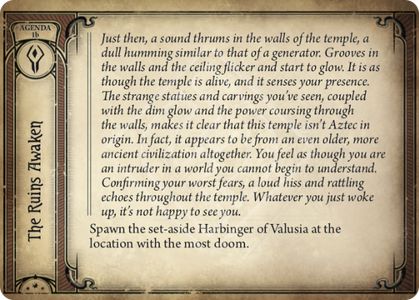