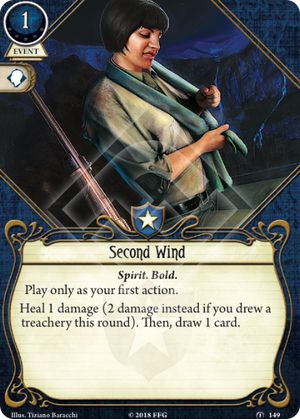 The very first card of the pack and I'm already impressed. While not flashy or splashy, this is a workhorse card that warrants consideration in any deck that wants to fight.

Its timing restriction is a bit of an issue; I can imagine (and have played) scenarios where the tank starts every round engaged with an enemy, which would make playing this tricky. I think you have to reconsider how you and your allies engage things if this is in-hand and you want to play it. In solo play, you don't have that option.

Its setback aside, this is usually a cheaper Emergency Aid that also draws you a card. You're drawing treacheries most of the time in any given scenario, even with two On the Hunts in your deck, and many of those can cause you damage with or without a test. Even if they don't, your role as monster-puncher generally means you soak a few hits, and as Mark you'll be pinging yourself every so often anyhow.

In short, it contends with Emergency Aid for damage healing, which is a good spot to be in, even though it can only heal you. The fact that it cycles is what really tips it for me, pushing this from being an iffy grab to a solid pick.

SGPrometheus · 224
In my opinion, this is one of those cute cards that you like but you can't find a slot for them, just like Trusted. — matt88 · 1693 7/24/18
It also has Spirit trait so it can be taken by Calvin, although I'm not sure about its usefulness in his deck - maybe any more experienced Calvin player will tell something about that? — KptMarchewa · 1 7/24/18
Looks pretty efficient as far as healing goes in this game. But I'm usually not looking for damage healing from my Guardians. The main exceptions would be a) if I'm playing Mark (he'll take this for sure) and b) if I'm playing The Forgotten Age. Otherwise, you just don't need this. — CaiusDrewart · 1767 7/25/18
Nice with the Smoking Pipe. Not even Guardians can take the pain from dumping all their horror damage into regular damage but this card bridges that particular gap. — Tsuruki23 · 1063 7/30/18
@KptMarchewa: Healing in Calvin is not usually the way to go for him. You're far better off with prevention or soaking. — Darthcaboose · 132 7/30/18