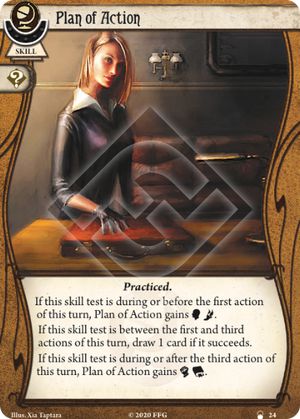 Here's a review of the card as it actually works. No, you don't get extra icons in the mythos phase ("of this turn" implies that an investigator must be taking their turn, as compared to "of this round"). No, you don't get 2 icons and get to draw a card.

This card is a deck slot filler.

Treat this as a de-facto cantrip with restrictions on when it can be committed, and it's not that bad a card to include in a 0xp deck. Especially if it's a deck that runs Practice Makes Perfect but doesn't have enough Practiced trait skills (e.g. only Deduction and Perception). Better that a Practice Makes Perfect hits this card than nothing at all.

In a very situational pinch, this can act as an unexpected courage if the window is right — practically, a boost to your first evade or last investigate isn't terrible if you really need it and haven't gotten a chance to commit this on a test on someone's second action.

Practically speaking, a skill card that gives +1 draw on succeed is very usable, even if it has commit timing restrictions. Of course it's almost completely outclassed by Eureka! for the same effect, so most of the time you want Eureka! before you want this.

suika · 7772
Not completely outclassed by Eureka! since Eureka! cant be committed to combat checks and isn’t Practiced, but otherwise spot on review. Plan of Action is a perfectly respectable PMP target for some investigators, particularly ones that don’t have enough other Practiced skills to run at level 0 (mostly true of Rogues). — StyxTBeuford · 12523 2/3/21
he fact, that it is a wild also makes it better for investigators with PMP, if they aren't a specialist. If you run PMP on a fight action and only find "Deduction" or "Perception", the search will wiff. This card will always be commitable. — Susumu · 156 2/3/21
1

The key difference would be if during your first and third action you are "between" them as well, if we can trigger the middle effect AND the first and third effect I can see this card being very useful, but if its just +2, or +1 wild draw I don't think its worth the hassle of finding the timing on this over unexpected courage or Inquiring mind.

Side note: it is fun bringing back Trish's flavor of swapping around her stats all crazy like in the board game.

I don't think this card is quite so limiting as all that.

For Minh, this card is essentially a +3 during Mythos phase, or Unexpected Courage + card draw on her second action. For any user of Tooth of Eztli, this card basically ensures you pass any will or agility treacheries (and get the card draw), and otherwise functions as the seeker version of Quick Thinking - by which I mean rogues get ? plus an action, where seekers get ? plus a card.

It does seem that its best function is either going to be before your first action (during Mythos) or as your second action (for the card draw), although many with access to 0 seeker will find times for the third action use as well.

I see a lot of arguments against skill cards by comparing them to Unexpected Courage. I have never understood that, as there's no reason you can't have both.

Time4Tiddy · 165
As far as I have heard this is not a wild+will/agility in the mythos phase given you aren't in a "turn" at that point, but otherwise yea, one wild draw a card is still really nice. Anyone who hasn't tried harvey with a ton of draw a card skills like this give it a shot, its great. — Zerogrim · 203 2/1/21
the problem with the wild+draw is that it's only during the second Action of your turn whereas the qt extra Action works whenever you commit it. So it's less controllable. I think it's possibly a good amanda card however (although it shows Trish). — PowLee · 10 2/1/21
This thing is only a wild in Mythos because it is no one’s turn. — StyxTBeuford · 12523 2/1/21
And why would that be? Where on the card does it say that it meeds tp be anybodies — Skeith · 1601 2/1/21
Turn. It reads before the first action of your turn, which the mythos phase arguebly is. So is every other test a preceeding investigator takes. The same is true for taking the iniative, that retains all its icons during mythos because everything happens before the first action of the turn. Otherwise both cards would surely read "only commit during your turn" or "durinf the investogation phase". — Skeith · 1601 2/1/21
It reads, "first action of THIS turn", implying that you must be in a Turn, which only occur in the investigation phase. Since this card chose not to say "this round" or "this phase" (which, btw, is what Take the Initiative says), it seems likely that you only get the bonuses during a turn. — Hylianpuffball · 11 2/1/21
I'm open to better understanding on this one - what are examples of skill tests taken during your turn but before your first action? — Time4Tiddy · 165 2/2/21
@Time4Tiddy For one, it could be treacheries in your play area that make you do tests at the start of your turn. Or it could be fast abilities/events that start tests, such as the Cryptographic Cipher. — TheNameWasTaken · 3 2/2/21
One example would be Garrote Wire, which initiates a fight without taking an action. That can be done during your turn before your first action. — StyxTBeuford · 12523 2/3/21
Hmm ok granted it doesn't say phase. I would still like official ruling on thst one seems needlessly complicated. — Skeith · 1601 2/3/21
No official ruling is needed. The word turn makes it explicitly clear that this does not have extra icons outside of your turn. — StyxTBeuford · 12523 2/3/21
Okay, while I still believe the wording on this card is NOT clear, review of MJN clarification on Quick Learner leads me to RAI only empowered during an investigator's turn. Putting will and agility on the front end of this card seems to be designed for treacheries. — Time4Tiddy · 165 2/4/21
Will is good for spellcasting and some treacheries' action triggered abilities. Agility is good for evading (something you want to do at the start of your turn) or indeed some treacheries' action-triggered abilities. Or free-triggered abilities, lately... — Yenreb · 15 2/8/21
@Time4Tiddy I mean, ruling aside, this card literally uses the word turn. Turn is defined in the rules and is completely explicit and transparent. No clarification is needed- it’s just a wild outside of someone’s turn. — StyxTBeuford · 12523 2/8/21
0

If you follow the reading on Abandoned Mine or The Lonely Tree, it is two icons + draw on your first and third actions this turn, an icon and a draw on the second action and two icons during the mythos and other phases.

madcircus · 56
MJ has said that’s not how this card is meant to be read. Between X and Y cards/resources and between X and Y actions might not be the same (inclusive or exclusive). — StyxTBeuford · 12523 2/1/21
If it's not a turn, it's not "during or after" or "during or before" any action of "this turn". So in the mythos phase, enemy phase, or upkeep phase, or even in the investigator phase but between turns, it's just a wild [unless someone is doing something 'as if' it's their turn]. — Yenreb · 15 2/2/21