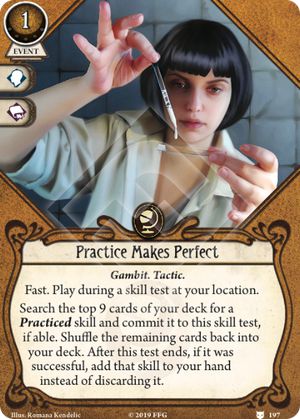 This card really interested me when I saw it. Besides sticking it into any Seeker deck, I can see this doing the most damage with Mark Harrigan. As Practice Makes Perfect is a Tactic card, he can use it. With cards like Vicious Blow, Take the Initiative and The Home Front, you're playing 5 out of 30 targets for Practice Makes Perfect.

When you attack, use Practice Makes Perfect. Either you boost the damage with Vicious Blow, get a variable (1-3 ?s) boost with Take the Initiative, or find The Home Front and all-but-guarantee your attack, as well as transfer a damage to your target. Not only that, but if the skill test succeeds, you get to return the card to your hand! Which means you get to use The Home Front twice in a game reliably.

WolfGeneral349 · 10
The nice thing is that Vicious Blow and The Home Front both effectively do +1 damage so Mark can use Practice Makes Perfect for extra damage more consistently that another investigator. I think Take the Initiative meshes awkwardly with Practice as you don't necissarily want to limit yourself to using Practice only on the first two actions of the round. But Overpower is also practiced-traited, and it's never bad for a fighter to take that card. — Spritz · 63 1/20/20
*necessarily — Spritz · 63 1/21/20
Very true, Take the Initiative isn't especially effective using the PMP formula. Overpower would probably be the better choice in a deck like this. definitely be the better choice. — WolfGeneral349 · 10 1/21/20
you could always take both Take the Initiative and Overpower. worst case scenario, take the initiative is only giving you +1, but you get to keep it in hand for next turn. additionally, more targets means you're less likely to whiff — Zinjanthropus · 171 6/24/20
Take the Initiative isn't super effective with PMP, however it's still better than it not being a practiced skill. Personally I think Mark needs either Take the Initiative or Steadfast to get +3's on the worst willpower treacheries anyways. Having Practice Makes perfect in the deck just makes Take the Initiative the better choice of the two. I'm a fan of Mark with 2x Vicious Blow, 2x Overpower, and 2x Take the Initiative. Then his 1x Home Front. 3 of them for extra damage, 2 for encounter protection. I'm least convinced by overpower, once Mark gets a weapon down he doesn't really need the extra strength. But overpower is always a safe card because you can use it anyways and draw another. I'm not a fan of lvl 1 leadership but Practice Makes Perfect makes the level 2 Leadership more interesting. — bspring · 1 9/22/20
6

Crazy good when you have several options for Practiced skills.

A Roland Banks might try to hit Vicious Blow / Deduction / Leadership. A Finn Edwards might pull out a Three Aces to set up the combo (also Momentum and Deduction obviously).

Overpower and Perception are in the pool of hittable skills, good complements to Deduction and Vicious Blow respectively to make sure you do actually hit something. Mandy Thompson can pull and commit two skills simultaneously!

Getting a second hit from a whopper skill card like Deduction or Vicious Blow is great value all on its own. Also as a search mechanic you might manage to find some research goodies while you're at it.

The problem is that this is'nt just one card, it's 10! You need to make some olypmics level informed decisions about the deck youre building with this in (and really, Practice Makes Perfect is'nt the key card here, it'll all those other ones you're trying to get repeat uses from), but the end result is pretty cool.

While Practice Makes Perfect has some good uses with combatants, I also wanted to point out that Mandy Thompson can use it to rather ludicrous effect. Using it on an arbitrary investigate can turn it into a single trigger where you can pick two of the most fitting cards to use out of a selection of cards including Deduction/Deduction (2) and Perception. This can turn a single card into both a boost and bonus clues or card draws over multiple tests. It only gets better depending on the secondary class picked - you can also branch into things like Enraptured with mystic access, or Momentum or Three Aces with rogue access.

The ability to improve Practice Makes Perfect from one draw/boost/bonus effect into two draws/boosts/bonus effects is immense, and given the symbols on many of those cards, it means she can throw it on pretty much any investigate action to get a lot of effective resources on top of a notable boost.