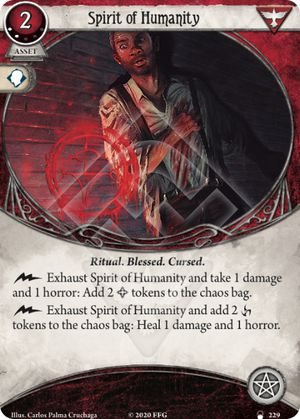 Calvin Wright will love this card. +1 to each of his skills and Bless tokens in the Chaos bag as a fast action.

Other survivors running Peter Sylvestre and/or Jessica Hyde won't mind this either.

Of course, being 2XP, Agnes Baker can also make use of this as the horror will trigger her ability, while the curse tokens can be used to power up Armageddon & Eye of Chaos if you then use this to heal her.

Preston Fairmont, with False Covenant in play, will like this. So will Minh Thi Phan with Blasphemous Covenant.

Father Mateo can also make use of it, thanks to the Blessed keyword. Allowing him to more reliably make better use of cards like Radiant Smite and Blessing of Isis.

As has been pointed out, I missed a couple. ;)

Tommy Muldoon, thanks to his interaction with defeated assets (and ability to recycle them), can synergise this card nicely with the likes of Brother Xavier and Tetsuo Mori. Allowing him to fill the bag with bless tokens whilst building to those cards being defeated. Thus triggering their abilities and earning Tommy a load of resources into the bargain.

Carolyn Fern, on the other hand, gains an asset that can be used to place horror that can be healed later, though some painkillers might be needed to deal with the collateral damage (and create more horror to heal later).

An interesting pick for a blessed/cursed Carolyn Fern. Letting her take damage/horror when she has none to heal and helping her to heal when she does. Also I can see Father Mateo+Paradoxical Covenant being insane, basically adding 2 bless and 2 curse tokens every 2 rounds (taking damage then healing it).

jonklin · 510
For the purposes of Paradoxical Covenant, this because an expensive reusable Tempt Gate. — suika · 7598 2/26/21
Father Mateo can also profit from drawing both Bless and Curse tokens with Eye of the Djinn — Zinjanthropus · 161 3/6/21
Was thinking of running the covenant, eye of Djinn, with both favor of the sun/moon to ensure I gain an additional action for 3 turns while being able to use the Eye at least twice per round. — gmmster2345 · 2 3/7/21
2

Aside from the obvious blurse synergy and the interactions with investigators that benefit from taking/healing damage (Calvin, Agnes, Tommy, Carolyn), it's easy to miss that this card is a whole lot of damage and horror mitigation on its own. For decks without much soak such as those using On Your Own, Spirit of Humanity can be a one-card solution to neutralize damage and horror from the encounter deck. Best have a way to mitigate or benefit from those curses you'll be adding, though.

suika · 7598
Definitely. OYO was one of the first things that I thought of when I saw Spirit of Humanity. I think it could also be interesting to build an OYO deck that uses SoH to add curse tokens, with Favor of the Moon to increase the odds of failure for use with the Survivor fail events. — Zinjanthropus · 161 4/3/21
1