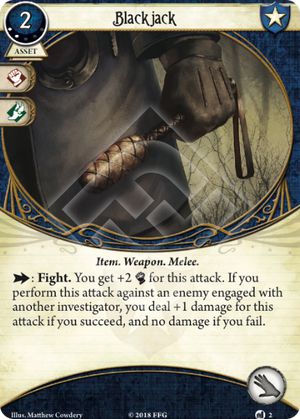 While level 0 blackjack struggles to be seen better than a knife, I became a believer of this level 2 head bopper in our TCU campaign. Joe Diamond rushing in with a machete while Diana had his back with this was quite the dream.

Currently with the taboo list, this costs the same as the machete as well. But blackjack favors the different playstyle. I think this weapon delivers when wielded by secondary guardians who aren't going to be primarily engaging and have clue-gathering or other casting to do with their other actions.

Compared with other weapons at this level, the .45 automatic might seem to be a better bet. Not damaging allies and ammo limitations aren't nothing though. Additionally, for resource-hungry decks, the 2 cost blackjack allows for a better turn 1 setup, is playable in the later game when you find yourself naturally low on cash.

In Innsmouth engaging enemies is punishing - I've seen guardians get dangerously low just from that. This long ignored weapon might just be good there as a backup weapon to get those fish off your clue getters.

Cannot say enough good things about Blackjack (2) in multiplayer Innsmouth, a campaign with tons of enemies in the Encounter deck:

Want to give it a little extra oomph? Enchant Weapon for +1 damage each round.

The only downside is it doesn't leave you well equipped to handle the enemies that are engaged with you. But that's what guns, Machete, Timeworn Brand, Enchanted Blade, etc. are for, and good news, you still have a handslot for them.