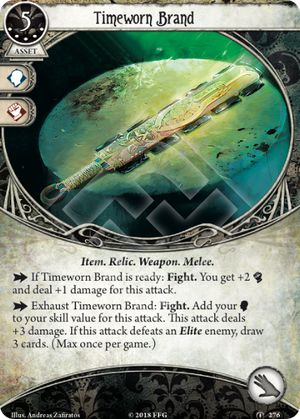 Quite the sick single-handed weapon. Its direct comparison is to the Machete and of course this is purely better statistically. As it should be for 5 experience. When you break it down, it has a better bonus to hit than the machete and always provides a bonus damage. Whereas the machete only does the bonus damage if they are engaged with you (problem if on someone else and you need to do multiple damage or an evaded enemy) and only if it is the only thing engaged with you.

The cost is high for this weapon at a cost of 5, and the experience rivals that of the Lightning Gun. But we are talking about a weapon that doesn't have an ammo limit, and only takes up a single hand. Comparing firearms to handheld weapons isn't typically something done lightly. The firearm should have the advantage at these direct comparisons. But even so, once per game you can still swing very strongly with this weapon at something scary. Often you will only need to be making one or two hits like this per game anyway as a necessity. That is the problem that arises from something like a firearm. You occasionally run across something you might not want to waste an ammo on, but find yourself doing so anyway while you wait for the proper target or you try to deal with them hand and fist. This weapon has the advantage of waiting for that moment and then unleashing upon it. And you receive an excellent benefit of filling your hand with useful cards upon completion. Zoe obviously stands out with the will and str 4 that would provide for a serious swing when something shows up that needs to be cut down.

This should be up there with the most powerful weapons in the game if it is not the one at the top.

Bronze · 150
I basically interpreted the "Once per Game" condition as a limitation for the last part of the ability (ie. the "If this attack defeats an elite enemy draw 3 cards" part). Are we sure it is for the whole ability?? It basically makes more sense to be that way, otherwise it would be too strong I suppose, but I would like to see a clarification. — matt88 · 2037 10/12/18
I think a natural reading of the card would be that the once per game applies to the whole ability. Moreover, this just has to be the case; this card would be completely, utterly broken if it applied only to the card-drawing clause. If it applies to the whole ability, this card is strong but reasonable for a 5 XP card. It's got to be the latter. — CaiusDrewart · 2229 10/12/18
If you read the rules, it is pretty clear that ‘max X per’ effects the entire ability: “If a maximum appears as part of an ability, it imposes a maximum number of times that ability can be initiated from all copies (by title) of cards bearing that ability (including itself), during the designated period.” — Death by Chocolate · 581 10/13/18
This card isn't unique, very intersting for 4 player. I assume you can't reset the limit by re-playing this card, correct? But other investigators could play their own or take yours with Teamwork and use the ability, as it's not a group limit. — Django · 2996 10/18/18
@django See my previous comment’s quote from the rules. ‘Max’ is different from ‘Limit’ and is a restriction across ALL copies of the card. — Death by Chocolate · 581 10/29/18
If "the Max once per game" applies to the entire bottom text what's the point of there being an exhaust clause on the ability? — ExemplarX · 1 11/4/18
nvm I RTFC'd — ExemplarX · 1 11/4/18
@ExemplarX: exhaust prevent using top abilty for the rest of the round. Personaly I would intepret this "Max" as limitation for what comes after "If ". Card has very high cost in XP and resources so it should be balanced. But Grim Rule tells us to interpet this in worst possible way until FAQ or QnA dont tell otherwise. ;-) — theczarek · 2 11/14/18
@ExemplarX: don't forget that there are also other effects that exhaust cards, for instance <a href="02015">Wracked by Nightmares</a>. Normally, you can use exhausted assets unless their usage requires to exhaust that asset. You cannot do it with this one due to specific limitation on the card. — chrome · 6 11/23/18
An exhausted card cannot be exhausted again, but this does not effect abilities that do not exhaust, so the first ability can still be used. So exhausting this item does not make sense to me. — Django · 2996 1/31/19
No no, the first ability specifically states that timeworn brand has to be ready to use it. You can't use both abilities on the same turn. — Eschaton1 · 1 2/4/19
You can still use the second ability after you used the first in the same round. — v6t2b9 · 1 3/22/19
When I have to add my "willpower" to skyll value, I also have to consider boost from card in play like "Peter"? — Flazzy · 5 3/26/20
Yes you add your total willpower. If it was only the investigator value, it would be mention as "basic willpower" and not just "willpower" — Tanean · 1 4/28/20
Great card for Diana - she can reliably work the 5 str swing, buff with Vicious Blow, and still have her blade in the other hand. By the time the bigger Elites are spawning hopefully she has a solid +3 or +4 will going to really smack them (and could still buff Vicious Blow as this attack is additive). — Time4Tiddy · 110 8/30/20
The "once per game" limit does not apply to the whole second ability. I does not have sense. Card uses "exhaust" mechanic this means the card readies during upkeep phase and "limit once per game " cannot prevent it. If they would want to prevent it they would have to add there additional condition "do not ready this card during upkeep" a why would they do it ?!? Simply if they would want the second ability to be used only once per game they would simply put there "discard" or "remove from the game" or "exile" mechanic instead of "exhaust" mechanic with additional two written limits/conditions. So this card functions very simply - you can use the first ability on it as many times as you want if the card is ready but in this case you get very basic attack bonus a dmg bonus which is far worse then Att/Dmg bonuses you can get from another card with similar cos/exp. value — Rado Gaman · 2 1/15/21