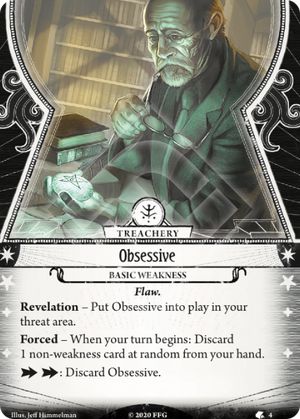 While most of the Starter Deck investigators got Basic Weaknesses tailored to make them (in particular) cry, Harvey got one that's reasonably mild for him. Sure, getting milled a random card each turn sucks, but Harvey can withstand a couple rounds of this better than, say, Ursula who struggles a bit with card draw. Annoying in HArvey, potentially devastating in almost any Guardian.

LivefromBenefitSt · 691
This one is actually the meanest of all the basics in the set imo. Because it hits you at the beginning of the turn, you rarely get a chance to kill it before it hits you, and losing 2 cards from one weakness (since it is drawn instead of another card) AND two actions is kind of brutal. Harvey can deal with it better than most since he's more likely to draw it with two actions remaining, and having more cards means it hurts less, but he's definitely still going to spend two actions ASAP to kill it. — StyxTBeuford · 12473 9/5/20
That’s why you ask your fellow investigators very nicely to take their turn before yours and remove it for you. :) — Death by Chocolate · 796 9/6/20
Very good point. — StyxTBeuford · 12473 9/6/20
Since I mostly play over Zoom these days, it's pretty easy to forget that I can take the actions to clear a partner's weaknesses. It's a useful thing to remember. — LivefromBenefitSt · 691 9/6/20