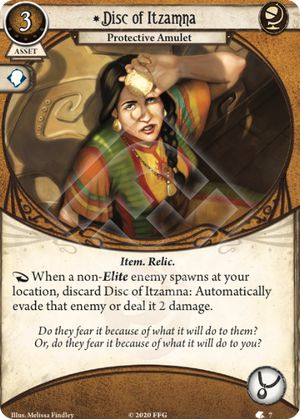 At 3 Resources, this is a bit expensive, since that (and the slot) could have gotten you Tooth of Eztli or Grisly Totem, always assuming you can't take Crystalline Elder Sign or Rabbit's Foot. On the other hand, Seeker isn't exactly drowning in enemy control, so this isn't terrible, just a bit overshadowed by other choices. It's the kind of thing that you upgrade out of fairly quickly once your core XP plan is realized.

LivefromBenefitSt · 165
Fair assessment. I agree it's a little pricey, but Seeker's are kind of spoiled because of the good Dr. Milan. I think this will see more play than it's upgrade. The upgrade doesn't seem worth it, but 2 damage is enough to kill a handful of basic enemies, and an action-less and test-less evade will help get away from non-hunters if they have more than 2HP. — LaRoix · 165 9/5/20
The damage is also nice against Victory enemies (it'll be dead and scored sooner, while discard would remove the threat from play, it wouldn't help you score the point). This cuts the other way (making the upgrade maybe worthwhile) in TFA. — Yenreb · 9 9/8/20