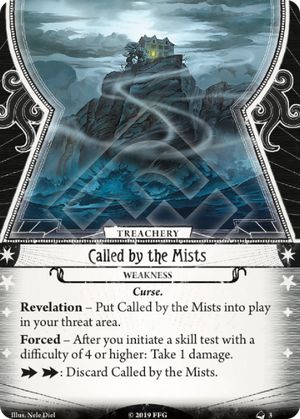 This has been updated to match my "Signature Weakness Project." I have done my best to make sure that the original content isn't altered too much, out of respect for any comments.

Another flavorful signature weakness. Looking at the two elements, the effect and the discard condition, we get:

The effect: Stella takes a damage if she initiates a test of 4 difficulty or higher. The Encounter Deck isn't shy about tossing out 4- and 5-difficulty tests, and it's pretty easy to get into a fight with Enemies with a 4 Fight and/or Evade. In Solo, the is just enough of a cost that you have some serious thinking to do when this pops out of a Rabbit's Foot draw....

The discard condition: . That is all. It does get discarded, but Stella is not all that likely to deck herself.

All in all, this is a below average signature weakness. it shuts down Stella's shenanigans until you can clear it, but it is unlikely to cost you the scenario or campaigns.