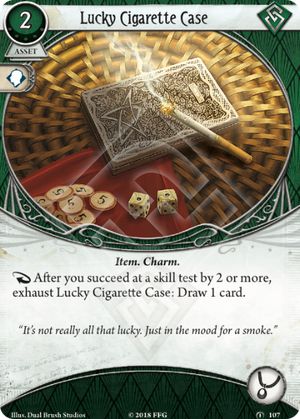 It helps if you are both lucky AND good.

This card is probably an auto-include in Rex Murphy. Run it with higher ed and you get extra clues and card draw at a low, low price.

Outside of Rex, most rogues will probably consider this card but I think the class as a whole is still waiting for a solid succeed by two archetype to be fully fleshed out. It might already be there (this card helps a lot), but it hasn't been fully fleshed out yet.

Although, it might also just be worth it in rogues with a high evade or fight stat. So long as it gets you three cards (likely to happen) it will be a net positive for tempo.