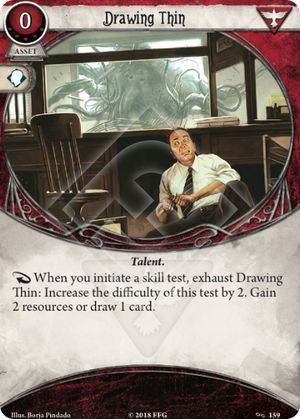 I think this card is incredibly broken. When I first saw it, I thought the skill test had to be succesful in order to get the bonus, which would 've been totally reasonable if that were the case. Instead, Survivors now get a card that lets them click for 2 resources once a turn simply by taking an investigate action and using this card and they still have a chance to get a clue. The only downsides I see are when there are negative effects of failing on certain tokens and the negative effects on Haunted locations in TCU. Other than that, I think it's almost an auto-include in non-Dark Horse decks in every Survivor.

What makes this card even better is its notable interaction with Rabbit's Foot and especially its upgraded version. With Rabbit's Foot, you now have even more reasons to fail tests, as you can now click for 2 resources and a card, and what makes this card totally absurd is its combination with Rabbit's Foot (3): With it, you can take an investigate action, proc Drawing Thin to increase the difficulty of the test, fail hard and tutor even further than you otherwise would, plus you get resources for doing so! And you can do this every turn! So, you now have a powerful tutoring engine that can get you all the cards you need while making money in the process!! Absolutely unreal!!

But you won't always have the luxury to draw or make money, right? Sometimes there's a tight race against the agenda, or the situation is rough and you don't have the luxury to juggle around with your deck. So, let's find situations where this is useful in other ways, namely when you have the opportunity to use this during a test you want to pass. These tests are not very common, but such situations can arise and allow you to make more profit out of this card. An example that comes in mind is a Finn Edwards or Wendy Adams with Lockpicks. Both of these characters can use Lockpicks to investigate at high skill value, allowing the use of Drawing Thin during that investigation without failing the test. In the same manner, other cards that test more than one stat that add up to one another can make interesting cases. Some examples are Cheap Shot and Slip Away. Another example is Rita Young. With her high Agility and all those assets that boost it further she has a good chance to pass an evade test even if its increased by 2. But let's be honest, if you have this card early, you can always just click for 2 resources and those cases where you will want to make money during a skill test will be rare, so it's a win-win in most situations.

Don't get me wrong. It's not that I don't like card. I love it, to be honest. But I wonder; how is it possible that a card with such powerful abilities and interactions was released?? Simply amazing...

matt88 · 987
I just imagine Yorick going bonkers with this card (or TWO) out. — CecilAlucardX · 2 4/8/19
It's a net +2 Fight with Fire Axe in play which makes me think this might be useful even in Dark Horse decks. — RPZip · 1 4/8/19
I pulled off a move with Wendy where I moved to a location, activated the Track Shoes then Drawing Thin to make it a +1 test (with Pete Sylvester in play). I took 2 resources which I spent to play Watch This while also pitching in Quick Thinking. Ended up gaining 4 resources and moving two locations without it costing a single action. That's insanely good. — Sassenach · 59 4/9/19
How would Live and Learn interact with Drawing Thin? Would the +2 difficulty still apply on the re-take of the test? — Cluny · 38 4/15/19
When I first saw this card I thought about Calvin: increase by 2 the difficulty of a test that deals him 1 damage/horror by lacking point and you boost him faster. — AlexP · 24 4/21/19
Yes, Live and Learn and Drawing Thin do have an ambiguous reaction. This was just cleared up by MN earlier today and I'll post the clarification on this page as its own review. But tl;dr: Drawing Thin effects both checks. — StyxTBeuford · 614 6/11/19
Drawing thin has an op interaction with Streetwise. If you trigger both on a test you basically net +1 on the test for free. — Tsuruki23 · 865 8/19/19
7

There was allot of hype about this card when it was spoiled and many reviewers considered it to be “OP” and a sure candidate for the next update of the “Taboo List”. Because you get the resources independently of the result of the skill test many consider this card to be free resources or card draw. After using this card though its limitations become apparent:

In conclusion I will say that this card can be awesome in certain circumstances but at least for me it fails to make a big impact more often than not. Using Drawing thin effectively requires good deckbuilding skills and some insight in game tempo and action economy. It is not like good old (pre nerf) Dr. Milan Christopher that you can just put into play and make it rain. For this reasons I wouldn’t support a nerfing of this card.

PD: I tried Drawing thin in the Return to the Night of The Zealot and in the first 5 scenarios of the Circle Undone on hard difficulty with Wendy Adams.

It's not immediately clear how this card interacts with Live and Learn. Does Drawing Thin apply to both attempts or just the first one? There was some debate about this, but the final ruling came from Matt Newman himself:

This is a bit of a tricky interaction, so I apologize for any confusion here. I agree it’s a bit ambiguous. I think the ruling that makes the most sense here is the following:

Again, apologies for the trickiness/ambiguousness. Hopefully this clears up this interaction, as well as clearing up how Live and Learn works in general. Thank you for bringing this to my attention; I’ll be sure to add it in the next edition of the FAQ as well.

Out of interest, do we have clarification on when you get the resources ? I read it as being immediate, ie before the test is undertaken. This could be incredibly powerful if so. The synergy with certain cards would be incredible. For example, initiate a test at +2 gain two resources which you then spend for a +3 boost from Streetwise. You just made the test easier by one while not having to spend any resources. Alternatively, what's to stop you from having two of these in play and just ploughing through easy tests getting 2 resources and a card every time ? Agnes can take this and partner it with something like 6th Sense, where she's just investigating at her willpower level every time. This is likely to mean that she sits at 6 or 7 (or 8 with Dark Horse) on a regular basis and she can just plough through any shroud getting 2 resources and a card every time she does it.

I'm not sure I agree that it doesn't suit a Dark Horse build btw. There looks to be an obvious synergy with Fire Axe. Guarantees that you can power up a +4 boost every swing if the resources can be immediately spent. Also, it offers a way for a Dark Horse player to get a quick resource boost if they need to pay for an asset.

This is a great card. If it cost 2xp I'd buy it in a heartbeat. I'm surprised that it's available at level zero. Seems almost like an auto-include for any investigator with access to it who has a reliable way of passing a lot of tests.

Interaction with Live and Learn from Matt Newman (designer)

This is a bit of a tricky interaction, so I apologize for any confusion here. I agree it’s a bit ambiguous. I think the ruling that makes the most sense here is the following:

Again, apologies for the trickiness/ambiguousness. Hopefully this clears up this interaction, as well as clearing up how Live and Learn works in general. Thank you for bringing this to my attention; I’ll be sure to add it in the next edition of the FAQ as well.

If i use this on Rotting Remains and draw , do i take 5 horror (or 7 if used both of them)? This would increase cards searched with Rabbit's Foot 3, if i fail?

And would increase the amount of charges if i succeed on the higher difficulty on Ancient Stone?

Django · 2150
Playing Drawing Thin on Rotting Remains seems like a terrible idea. If you auto-fail, you'd be taking 5 horror - drawing a 0 when the difficulty is 5 means you fail by 5. By the same token, It would increase the charges on Ancient Stone, which directly references the difficulty of the test. — cb42 · 21 5/17/19
Except of you plan to deny the existence (5) of rotten remains - then it is a very good idea! — trazoM · 1 5/19/19
Or if you're a (mostly) sane Agnes and there's an enemy around. — TheNameWasTaken · 3 5/19/19
Unfortunately, you can't use Drawing Thin on Rotting Remains or almost any other treachery card with a Revelation effect. Drawing Thin can only trigger off of skill tests you initiate - things like investigate, fight, or evade actions. — Tynian · 1 5/23/19
Actually, Tynian, that is quite incorrect. The card text of ‘when you initiate a skill test’ is not in contrast with an ‘unwilling’ skill test from an encounter card but in contrast to ‘another investigator’ initiating a skill test. If you go back through the rules, you will see that ‘initiate’ is used to mean ‘resolving some effect in full’, whether it’s an elder sign ability, or action, or a ‘when’ clause of rules text, etc. There is no required notion of player agency when it comes to ‘initiating’. Heck, technically, you aren’t any more responsible for initiating any of skill tests you mentioned because you choose the action and the game rules of said action trigger the skill test. So, yes. You can use Drawing Thin, or any other ability that triggers when you initiate a skill test such have as Money Talks, on a skill test during a Revalation effect. — Death by Chocolate · 12 5/24/19