Revelation - Put Deeper Slumber into play in your threat area.

Your maximum hand size is reduced by 3 and is checked after each time you draw 1 or more cards. 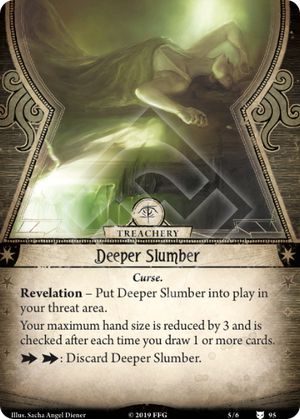 How does this card interact with Patrice Hathaway? I understand Patrice draws her hand all at once, but since it's being checked as she's drawing them, does this mean she would only draw 2 cards a turn, or does she draw 5 and then discard 3 of them every turn?

I assumed the latter last time I played so while the treachery is relatively harmless for a lot of characters, it was absolutely crippling for Patrice. I also had Self-Centered for my basic weakness, and drew Deeper Slumber not once, not twice, but three times. I literally felt like I played only half my allotted turns that game, all soaked up getting rid of these things. Where was Ward of Protection when you need it?

My strategy is to pick up Versatile and get Laboratory Assistant for my bonus class card. But if I have all that in play and draw this, would I be drawing 4 cards a turn, or drawing 5 and discarding 1? Might seem like a fluke, but the card was so debilitating, I'm making a fear purchase for next game. If it's drawing 4 a turn, that would actually work well with the build I'm going for as it slows down how fast I would go through the deck. The only downside would be only having 4 cards a turn instead of 5 (3 if I have the Watcher from Another Dimension but he's usually a one and done), but as I said, that might work in my favor and I'm curious to play a slower draw Patrice. It sounds like fun. More fun than grim ruling it anyways.

LaRoix · 1447
You're right, you draw until you've got 5 cards in hand, then discard until you're at your limit, as her ability does not care about your hand size limit. Same is true if you got other cards that reduce hand size like "drawing the sign". You discard all cards if you get both, btw. Another example, if you got deeper slumber but draw 2 weaknesses with a revelation, your hand is down to 3 cards, so you don't need to discard. Instead of Laboratory Assistent you could take William T. Maleson instead, Scrying or Alyssa (and be lead investigator). — Django · 3498 4/26/20
Just because you are self centered and can't help others doesn't mean others can't help you get rid of your Deeper Slumber. So while the action cost of this card remains, it doesn't always have to be you who's paying it. — TheNameWasTaken · 3 4/27/20
Copy that, thanks. Hmmm Maleson isn't a bad call. And right, I forgot about that. Next time I'll ask my Tony ally to spare two of his neigh infinite actions. Appreciate the comments! — LaRoix · 1447 4/27/20