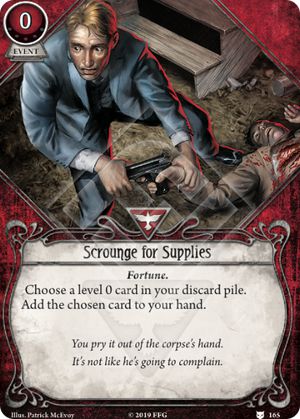 This card is fantastic and stands alongside Drawing Thin as one of the survivor cards of which other classes are actually jealous. I hope it doesn't similarly end up on the chained list of taboos.

Android Netrunner had Archived Memories for a similar cost and effect, except in that game the archives was a vulnerability rather than a potential resource farm. Still the card saw a lot of play.

The rules reference p5 cites a level 0 card as being one without any pips under its cost, but the FAQ errata for the core set investigator fixed cards makes it clear that you can't use this to return Nautical Prowess. So what can you do with it?

Well, Resourceful is an universally played card in survivor, but only returns cards. This is a proactive version of the same effect and happily returns cards from other factions. It is therefore especially excellent for characters who simply splash survivor, such as the Dunwich investigators. Being limited to level 0 cards is fine when it includes every card in your starting deck!

This card gives the ability to better spam something important like Ward of Protection or "I've got a plan!", recover a defeated ally or spent item, and turns treacheries that mill your deck into greater card selection.

Cross your fingers and pray for a 5 xp upgrade to this that returns any card. Or a Yawgmoth's Will, I'm not fussy...

The_Wall · 231
The intended rule is that signature cards and story assets have no level (and are not considered to be level zero). This can be seen from the card errata under the five core-set signatures in the FAQ, as well as from FFG's rules clarification reproduced on this site under those five cards. — Spritz · 58 1/16/20
I agree. They're also unable to purchase and haver no level printed as same as other Level 0 cards. — AquaDrehz · 158 1/16/20
I accept that errara; it needs an actual rule to back it up across the board, but the principle is there. The only truly great interaction was Nautical Prowess in any case. I'll modify the review - still a great card. — The_Wall · 231 1/16/20
I think it’s rather overzealous to put this in similar standing to Drawing Thin. This makes any level 0 card in your discard playable, but it costs an extra action and card to play. Works okay with fast cards, but you could’ve just included a more immediately useful effect. For example you could take this to recur Ward, or you could take Deny Existence and have more choice on what you cancel and how, and save actions in the process. Resourceful being actions-less and able to hit leveled Survivor cards (namely Eucatastrophe) is huge. This card if it even ends up in my decks, and I rarely see that happening, will get replaced once the deck gets heavily leveled. — StyxTBeuford · 12387 2/3/20
Just a correction from the previous comment: using this costs an action, but since the card is replaced with the card you retrieve, there is no loss of cards. So it only puts you down one action, which should be easy to overcome using the powerful card you brought into your hand. But don't use this to bring back economy cards like emergency cache, which will be diluted by the lost action. — jmmeye3 · 533 5/11/20