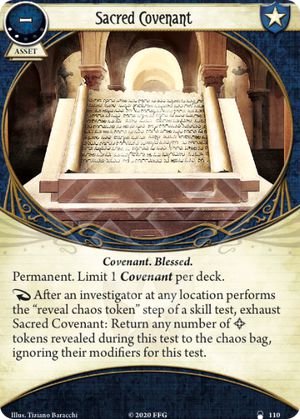 My initial analysis of this card wasn't great. Sure, it adds a lot of tokens to the bag, effectively, but I am still not really sold on the power of bless tokens. There are a few things worth noting here though, first, it triggers on a test at any location, as opposed to the other covenants. Second, Diana Stanley. Her ability places things below her as an effect, not a cost, and Sacred Covenant uses the word 'ignore'. This is notable, because though the explicit ruling is not that permanents can't be placed beneath investigators, every ruling thus far has been along the lines of "permanents can't leave play" and cards beneath investigators are not in play. So you should be able to trigger her ability, get the card and resource, and keep your covenant in play. This is silly, if you are doing some bless things. You could even double down on it with Dayana Esperence and Radiant Smite so that you get some good benefits out of the tokens, making a poor woman's Flamethrower.

h9uu · 24
Dang, yeah. I can't find any RAW reason that combo doesn't work. Hilarious! — Death by Chocolate · 1229 11/26/20
Also, I think ArkhamDB just let me like this review 13 times by accident? — Death by Chocolate · 1229 11/26/20
Please correct me if I'm wrong: if a card isn't actually placed beneath Diana, then she can't get the card/resource effect. At least, that's how I understand it. — snacc · 822 11/26/20
@snacc Yes she can. Those are two independent effects - placing the card is neither a cost, nor a "then" situation, so you do everything you can and one part failing doesn't stop the other. Just like you could still place a card under Diana if something were to block her from drawing cards and gaining resources. — TheNameWasTaken · 3 11/26/20
I'm sure there will be a more explicit ruling/clarification about this card, but given that it obviously wasn't intended to work that way, I'd consider the specific wording on this card. You do not cancel the token, you cancel the modifier. Diana's power, which cancels game effects, has been clarified to include cancellation of tokens. This card explicitly does not cancel the token. — Time4Tiddy · 213 11/27/20
I think one other thing to mention if you are getting all rules lawyers about it is that this card doesn't use the word cancel or ignore. It says 'ignoring' which only exists on one other card and it's not one that Diana would usually have access to, so I think it's currently at least slightly questionable that this card effect does cancel or ignore — NarkasisBroon · 9 11/27/20
Thats decidedly untrue. Ignoring and ignore are the same verb, and apply under the same conditions. — StyxTBeuford · 12738 12/1/20
(v1.1) Rules Reference page 16, column 2, “Permanent” The fourth bullet point should read: “A card with the permanent keyword cannot leave play (except by elimination).” from the official FAQ. The whole putting the card under Diana Stanley would not work. — Atrael · 1 4/12/21
Visit Diana Stanley to read up. There was another FAQ stating that the cards beneath her are considered removed from play. — Atrael · 1 4/12/21
play., ignore my previous comments, my brain at 5am didn't see where the : was — Atrael · 1 4/12/21
@NarkasisBroon I'm not sure that the card explicitly has to contain the word "cancel" or "ignore" to trigger Diana's ability. I think that's just the easy way people use to find which cards would work with her. For example, if you played On the Hunt and spawned an enemy engaged with you, you'd be ignoring the "Spawn" text on that enemy, which in my opinion, would trigger Diana's ability, even though the card does not use the word "ignore". — snacc · 822 3/11/22
4

When playing Sister Mary in a high player count I often got annoyed when somebody else would pull several blesses at a time on a simple test that they would've succeeded on anyway. This prevents that once a round (note that it can activate at ANY location unlike the other covenants!), and being Mary, I also need those blesses to seal, kill, or delete, and if most of them are gone after the mythos phase and you have no bless recharge in hand, it can be infuriating. This 2 xp card might not look powerful but that's only until you see it silently doing work. If your cards consume blesses, you will love this, but if all you want out of blesses is to just make the bag easier, Sacred Covenant would probably be a waste.

Vittek · 1
You ignore its MODIFIER (+2) but not the EFFECT attached to the bless token, which is to reveal another token. — Pinchers · 103 4/16/21
Ah, I was sure I was missing something. Thanks. — Vittek · 1 4/16/21
Also, any time a token makes you reveal another token, you basically loop back to step 3, so you can wait until the end of the chain of token reveals before activating Sacred Covenant and return multiple Bless tokens. If you want a Covenant that basically adds 10 +2 tokens to the bag, take Ancient Covenant as that does what you want: stopping the test while positive. — Death by Chocolate · 1229 4/16/21
I guess you combine Ancient and Sacred Covenant? - on two different investigators of curse. — tdctaz · 45 4/26/21
I take that back - it is not possible. After Ancient Covenant triggers during the resolve there are no futher reveal steps for Sacred Covenant to trigger in. — tdctaz · 45 4/26/21
This could also only be done with different players, as you're only allowed one covenant per deck. — Jaysaber · 7 5/3/21