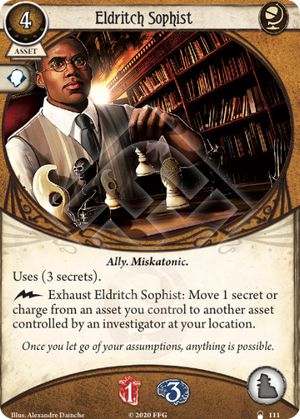 Hmmm. You can use this card to translate Forbidden Tome a couple of turns quicker, all while refilling Mr. "Rook", Encyclopedia, Esoteric Atlas, etc. Can you use it to translate Archaic Glyphs faster? It say so put a Resource on it "as a secret."

It's a pity that it's pretty hard to get ES in a deck with Quick Learner. I'd like the chess motif....

LivefromBenefitSt · 342
You could combo with Decorated Skull, which can generate charges to move to your spells. Unfortunately there are not many investigators who can take Decorated Skull and Sophist, and also care about charges. — Zinjanthropus · 156 9/6/20
@LivefromBenefitSt I don't think you can translate the glyphs with it. I believe there's a ruling somewhere that you can't put tokens (ammo, charges, secrets, etc) on a card that doesn't have the same "uses (token type)". The glyphs don't say "uses (secrets)" so you can't put secrets on them. The glyphs themselves override that with the specific>general rule. Otherwise you could translate them in a flash with Astounding Revelations or Truth from Fiction. — SGPrometheus · 339 9/7/20
The only such rule only prevents cards *which have a Uses keyword* from gaining other types of Uses - people do in fact use Astounding Revelations and Truth from Fiction for that purpose. — Thatwasademo · 32 9/15/20
@Thatwasademo Incorrect. "A card cannot bear uses of a type other than that established by its own "Uses (X type)" keyword." applies to cards without a "Uses (X type)" keyword. Since they do not have that keyword, no uses type is established and thus they cannot bear any type of uses tokens. Read another way: 'A card can only bear uses of a type established by its own — Death by Chocolate · 581 10/8/20
"Uses (X type)" keyword. Yes, people do in fact use Astounding Revelations and Truth from Fiction for that purpose, but it is in violation of the Rules Reference. People play the game 'incorrectly' all the time. That hardly sets sufficient precident for anything beyond the rules being too ambiguous in the situation. (Which, as one of the only cards that puts 'use' tokens on itself without the "Uses (X type)" keyword, it is absolutely problematically ambiguous.) — Death by Chocolate · 581 10/8/20
Hmm. By that interpretation, how does Tony's Bounty Contracts move bounties onto enemies? They're a use type, and the enemies don't have a Uses keyword, so this argument prevents them from bearing them. — Tamsk · 1 12/28/20
It is written if there is an established type, than it cannot bear any other. If there isn't any it can. Otherwise Glyphs couldn't translate itself as there is no established type on it. — vidinufi · 37 1/10/21