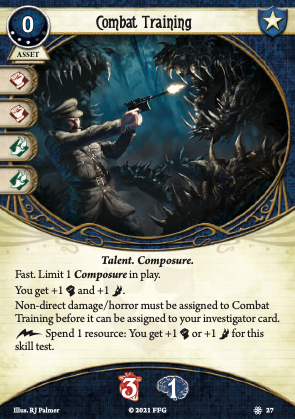 Like the others, it's a major improvement on the initial set of composures. But, like the seeker's card, guardians may struggle keeping it in play if they lack the horror soak.

All of the fighty guardians (and Lily) enjoy the fist stat boost of course. Mark probably benefits the most from this card, which fits thematically. He really loves the extra damage soak as it will help keep him from getting too guilty over Sophie and even boosts his card draw. He might even like the foot stat boost as well to help pull off some quirky tactics-based extra long-range sniping. NaCho can also use it to boost his fight stat on the events that he plays. If you plan on using some of the new cards included in EOTE, they also work well with the 2 stat boosts.

Ironically, the 2 guardians who are the least likely to have combat training probably like it the most. Carolyn can use it to funnel resources into evasions in an emergency, but she'd rather gang up on her enemies. Mary can use it to boost her average fight stat. And they both enjoy the damage soak.

Can't wait for an agility-based guardian to come out and start putting that foot boost to good use! Oops, she's in a different class!