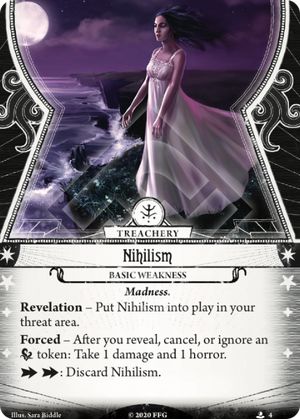 Note that unlike many abilities that are resolve when you reveal certain tokens during skill tests, Nihilism's Forced ability, as far as I understand it, occurs even if you reveal, cancel, or ignore tokens outside of skill tests.

This means that Nihilism's Forced ability would also occur when you reveal, cancel, or ignore 's during play of cards like Hypnotic Gaze, Voice of Ra, and also during certain location/agenda/treachery effects that don't involve tests (example: Clover Club Cardroom).