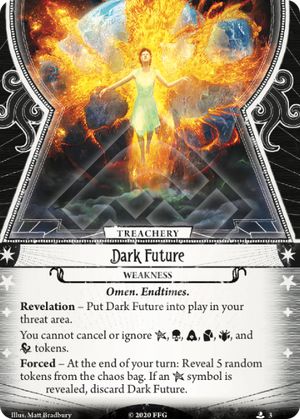 This has been updated to match my "Signature Weakness Project." I have done my best to make sure that the original content isn't altered too much, out of respect for any comments.

Another flavorful Signature Weakness from the Starter Decks. Looking at the two elements, the effect and the discard condition, we get:

The effect: It severely limits Jacqueline's special ability by making it impossible to cancel "bad stuff" tokens, effectively shutting it down until this can be cleared. It also shuts down Dark Prophecy, Defiance, Defiance (2), Grotesque Statue (2), Grotesque Statue (4), Olive McBride. It appears not to shut down Seal of the Elder Sign, Tides of Fate, Ward of Radiance, Voice of Ra. It would not affect either of the Will to Survives and probably other non-Mystic, non-Neutral cards, but Jacqueline can't take them, so let's not worry about that.

The discard condition: Draw a in a random pull of 5 tokens. Jacqueline can use her ability on this, along with cards like Olive McBride, Dark Prophecy, etc. to increase token pull.

All things considered, this might be the worst of the Starter deck Signature Weaknesses. Nathaniel's just takes strategy and effort (or a whole turn of basic Fight), Harvey's could kill him at a bad moment, but it's one and done, Winifred's is more a roadbump than a Weakness, and Stella's, while a problem, can be cleared with . Jacqueline's Weakness could hang around for the entire game, although that's not all that likely, with 2-4 turns being average.

LivefromBenefitSt · 710
I disagree; I think Nate's is worse. The bottom line here is that this might not lose you any actions at all; Malloy can lose you quite a few, and eats resources no matter what. You can continue to do things pretty much as normal with this, just being a bit more careful. One "benefit" of this is that you won't be tempted to use her ability during your turn, meaning you'll have it at end of turn for this. — SGPrometheus · 554 9/10/20
It is super dubious to say this will hang out all game. Even in a 16 token bag without using your ability, you’ll clear it 31% of the time. The chance that it sticks around for 8 rounds is already less than 5%, and as soon as you start using your ability on it it becomes much more likely to clear. — StyxTBeuford · 12504 9/10/20
Nathaniel's is a turn of actions, maybe less if you have a Beat Cop or some other way to ping damage. Malloy hits hard, but his Combat of 2 is child's play for Nathaniel at most difficulties. It would generally take more cards to beat the Mob Enforceer. Dark Future shuts down Jaquiline's central ability and a good chunk of her core card; swhich feels like more of a pain to me. — LivefromBenefitSt · 710 9/10/20
StyxTBeuford -- OK, you are right, assuming Father Mateo or Crystaline Elder Sign hasn't locked the token up, but 3-6 turns isn't out of the question, unless you use all your tricks. I mean, Jaquiline's ability makes it a 7 card draw, and Olive would take it to 9. You could play 2 Dark Prophecies to get it to 17, and maybe a charge off a Statue to pull the whole bag, but that's a steep cost in charges and cards. Additionally, for me, losing access to abilities somehow hurts more than taking damage/horror or getting a nasty enemy or losing a couple of actions. Your mileage, of course, may vary. — LivefromBenefitSt · 710 9/10/20
If you have Jacqueline Fine in the party and you’ve chosen to buy CES or bring Mateo, you’ve made a massive mistake. — StyxTBeuford · 12504 9/10/20
Yeah having used this a fair amount this is a super gentle weakness. It usually has very little impact, and it clears itself. I generally have 2 dark prophesies in the deck and just hold onto them as insurance. But your investigator ability + a dark prophesy or two + olive McBride is all but guaranteed to get rid of it. — NarkasisBroon · 1 9/10/20
Like, as long as you’re willing to save your ability on it, it should be gone pretty soon. It shuts off your ability, but not the fact that you’re a 5 Will Mystic, and you still can use your ability, if need be, on bad numbers. I think this is the tamest weakness except for Arrogance. — StyxTBeuford · 12504 9/10/20
FWIW, you can also seal the +1 for Crystalline Elder Sign. Strictly speaking that means that the Elder Sign is more likely to be revealed. Mateo can choose to cash in the book after Jacqueline draws — Zinjanthropus · 165 9/10/20
*after Jacqueline draws Dark Future. Not to say that Mateo + Jacqueline is a dream team or anything. — Zinjanthropus · 165 9/10/20
On Easy and Standard sure. Hard and Expert dont have +1s. — StyxTBeuford · 12504 9/11/20
It doesn't prevent Defiance (0) or (2). This card says you cannot cancel or ignore those symbol tokens. Defiance ignores the effects, not the token. (See also Defiance + Shriveling/Baseball Bat) — Yenreb · 15 9/15/20
Are we positive that Dark Prophecy helps with this weakness? As far as I can see, when you're about to draw the chaos tokens, you will say: I'm going to reveal 5 chaos tokens, +2 per Jacqueline's ability; the last of the 7 will be substituted by 5 tokens per Dark Prophecy. You proceed to reveal 6 tokens + 5 for DP. You cancel all but 1 of the tokens of Dark Prophecy (keeping a symbol token except elder sign) and then canceling 2 more (or 1 tentacle) for Jacqueline's ability. What happened is that you basically screwed yourself, because if you drew the elder sign with dark prophecy you had to cancel it in favor of an other symbol. Isn't this how it's supposed to work? — Vittek · 1 4/25/21
@Vittek - Discard condition is bound to "if elder sign was revealed", so maybe it is true even if this symbol was not chosen. — johniez · 3 5/15/21
I just finished A Thousand Shapes of Horror with Jaqueline and this weakness lasts till the end (like 12 rounds), not using Dark Prophecy. Pretty anoying that this rare token is so hard to get on light. — johniez · 3 5/15/21
I don't think it shuts down Olive....... you just have to be aware of what tokens you are going to ignore. If you ignore a say, 0 or -1 for instance, and one of the other tokens revealed is an elder sign, you would be golden, right? — tasman · 1 5/30/21
@Vittek — Dark Prophecy does help with this weakness. Remember that the entire point of Dark Future is that you cannot cancel or ignore tokens, and that includes the ones revealed by Dark Prophecy. So you would 11 tokens, not be able to cancel any of them, then toss Dark Future if you hit an elder sign. — Whimsical · 1 7/5/21