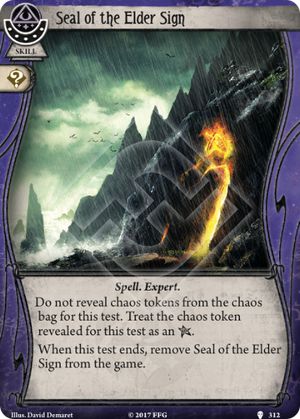 Only take for a deck that has a superb effect.

Akachi Onyele and Father Mateo have super powerful effects so they are obvious benefactors. Father Mateo especially likes this since he has a choice of benefits in addition to an "Automatic success" result.

An incredible trump card to play against a key opponent, a game-stopping treachery like Locked Door or to gain tempo during crunch-time. This card is as varied as the important tests that may come up. In single player try to hold onto this for those tests that you just aren't geared for (Aforementioned Locked Door is a good example of something that just screws over a . In multiplayer the card also gains a new niche as a way to net easy, no-risk kills on enemies engaged with your friends.

Don't forget that you can boost a buddy, characters like "Skids" O'Toole, Finn Edwards, Silas Marsh or Zoey Samaras all get massive benefits, some of which really kick off with foreknowledge (Like Zoey's damage buff, which is incredibly powerful when you can plan and account for it, all of a sudden she can one-shot a major threat.).

Tsuruki23 · 1082
Even for weak elder sign effects this is good to have for important tests, like Rotting remains making you insane with autofail. — Django · 2653 6/21/18
You are correct in theory, but in this scenario you would be far far better served by a card that pull´s it's weight all the time, Shrivelling 5, Arcane initiate 3, Ward of protectiong 5. This card only really shines when you seriously want the elder sign trigger. — Tsuruki23 · 1082 7/3/18
I’m running a Diana Stanley deck, with Preston Fairmont as the co-investigator. Both have pretty strong elder sign effects, so should be flexible to get my cancelling cards back or for Preston to auto-succeed a very difficult test — Phoenixbadger · 29 7/14/20
3

Expensive. I think this card is waiting for an investigator who can take it who has a bomb elder sign.

As is, I can't really think of many reasons to take it, outside of multiplayer. 5 for a (probably) auto-success is okay?

Very team comp dependent. Some investigators love it, some of your buddies will love it. I think it is waiting for its moment to shine.

Myriad · 714
I'd say Akachi qualifies as an investigator who has a bomb Elder Sign. This is pretty terrific for her. (Though she probably wants to grab some upgraded spells first.) — CaiusDrewart · 1770 3/27/18
I think this card is great. 5xp is a lot, but I place a lot of value on knowing that a test will succeed, and the added bonus of an elder sign effect is icing etc. — SGPrometheus · 225 3/27/18
>Father Mateo?:] — Pleechu · 1 4/27/18
Combos with someone who is running Deciphered Reality or the Seeking Stones, big-time (throw in a Double Or Nothing while you're at it) — Low_Chance · 4 5/2/18
Just noticed this is a spell; Arcane Initiate can fetch it. Awesome. — SGPrometheus · 225 5/18/18
I think Diana Stanley is that investigator as it helps her not only pass a skills test but recur her Dark Insight which is super powerful. — Snakesfighting · 72 4/24/19
Can Minh's elder sign ability return this card to it's owners hand before it goes out of game? — Malfean · 1 9/8/19
#Malfean im guesing it could but ... effect from this card is applied same time as hers. You will be forced to removed it regardless you will trigger to hand transfer or not. Remember there is no instead keyword on her ability so it is not overriding any other triggers on cart it self. — Bany · 14 1/8/20
but it is not Forced ability so ... tbh you could theoretically choose order of triggers ... someone need to clarify this :) — Bany · 14 1/8/20
From rules “ A card that has been removed from the game is placed away from the game area and has no further interaction with the game in any manner for the duration of its removal. If there is no specified duration, a card that has been removed from the game is considered removed until the end of the game.”. So you can’t remove it from the game and then take it back, because you can’t interact with it once it is removed — Phoenixbadger · 29 7/14/20