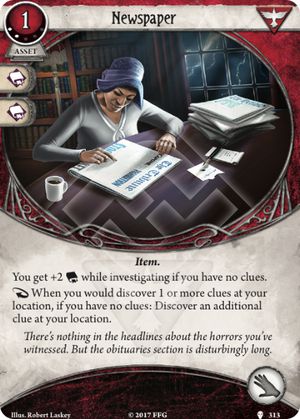 It's particularly great for Pete (as it works with Duke) and Minh, both of whom want to be searching anyway. Wendy's probably down with it too.

Newspaper is everything Newspaper was not, the ideal way to pull your weight in clues while your primary job is something else. Take it solo, take it in duo, leave it in larger player counts (except 3 player with "Ashcan" Pete, where the ability to grab 3 clues is astonishing).

The extra clue is all the difference. A 2 character can complete a moderate or easy location by committing a Perception or Unexpected Courage and even stand a decent chance without the extra cards, it's also great for those rounds where you've got your weapon out and some combat support assets so you've got nothing better to do than to try the easy clues. William Yorick and even Agnes Baker will suddenly have a pretty good way to fish clues from 1 and 2 difficulty location, and the added bonus can still contribute to a successful "Look what I found!".

Wendy Adams and "Ashcan" Pete can both put Newspaper to good use, although unlike William Yorick who only goes for clue's occasionally, they look for them all the time, which slightly diminishes the effect and priority of Newspaper in favor of more consistent cards like Flashlight. Take note of the 2 icons, those icons are a big number for an item, especially considering the fact that both of those characters are pretty good at Scavenging. A recursible +2 bonus is not to be ignored! Even if you never actually play the card as an asset.

The only real downside for Newspaper is the scenario factor. if you advance the act repeatedly and keep wiping off your clues then yes its good! So good! But when there's just two acts (One even?) Then you're straight out of luck, thankfully though there's still the Scavenging interaction.

If you loved Newspaper you will love this.

If you hated Newspaper, you will hate this.

Its great in Solo. Weaker in multiplayer and probably best for Survivors who cannot take seeker splashes.

But it does have some cool synergy with look what I found and drawn to the flame.

Myriad · 714
I think this is an amazing solo card I think, and means you can investigate with Duke on 6 and get 2 clues with Pete.and in say Yorik in multiplayer it could get some good use, there are often times 2 clues is enough to advance the agenda or the game in some manor — Quilzar · 5 3/27/18