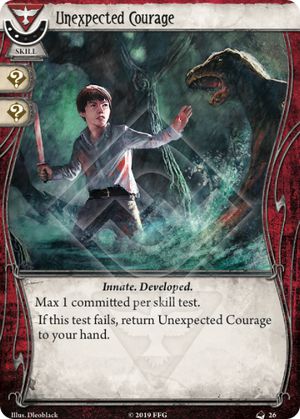 It's not a terrible card; 2 icons and a "return to hand" effect is a nice hedge against failure, but I am not sure how often this will get played, given that 2 XP in will get you a Peter Sylvestre (2), "Look what I found!" (2), .18 Derringer (2), or 2 copies of Brute Force or Sharp Vision. I suppose Silas might like a situation where he contributes this and something else for, say, a +4 to a skill test, draws badly, then pulls the second card back with his Reaction Ability and this back with its own ability. That would feel pretty good.

LivefromBenefitSt · 342
Pair with "Look What I Found" on (4) tests. — MrGoldbee · 924 9/5/20
Survivor upgrades tend to run fairly cheap (though there are some more niche expensive ones entering the card pool as of late). For me, it's not an issue of if, but when I'll buy a certain survivor upgrade. And yes, I agree, Silas could do some really good work with this to make sure he's getting clues or passing willpower test especially. — LaRoix · 1409 9/5/20