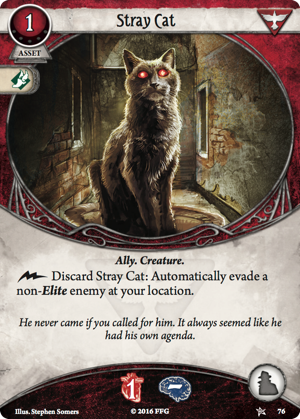 At first glance the gloomy Stray Cat seems like a premeditated evade which is not particularly great, but there are some nifty tricks you can do on your turn:

As a cat person I have always wanted to include the Stray Cat in a deck but it never quite made the cut. I think there was once or twice that it made it in with the hopes that I could use Calling in Favors to search for the ally that I wanted but it got bumped out almost immediately by XP upgrades.

The cat has always been an iffy play because of its one time use AND restrictions on use but I was trying to find an investigator to pair up with Ursula for my first play of The Forgotten Age. The only thing that I really knew was that evasion was good and I knew a little of the Vengeance mechanic. Most of the other types have really poor evasion skills but I got the idea to pair Yorick with the Stray Cat.

And it was an amazing combo. Ursula and Yorick were usually able to clear clues off of locations and even stay ahead of previously evaded Hunters.

It isn't that hard for Yorick to kill enemies but it usually takes 2-3 actions to do it and there are always the chance of bad token pull (retaliate) or special tokens that cause something else to happen. Yorick can instead use his Flashlight 1-2x and move to the next location getting closer to completing the scenario instead of needlessly hacking at an enemy.

This was obviously the perfect campaign for the cat but I will definitely keep this in my Yorick decks for action efficiency.

The rest of the other survivors have high evade skills so it wouldn't help much.

I have never played nor even thought about how to build decks for Preston, Lola or Calvin. I doubt it makes sense.

Overall it worked great for Yorick in TFA but Ashcan Pete is probably the only other investigator that I would try to include it in. And that is only because I want to setup a deck without Peter Sylvestre for Pete. I think it is safe to keep this in your unused cards section. Unless you are playing Yorick.

TWWaterfalls · 847
Tony can't take it because it's an asset. Love the Yorick idea though, that's genius. The only time I ever included this card was as a thematic placeholder for Miss Doyle until I upgraded into her. Don't think I ever used it. Odd choice of card to be included in the core set really. It fits with the theme of Wendy but she has no use for it. — Sassenach · 166 2/15/20
Rita obviously likes Peter Sylvestre more, but Stray Cat being able to auto evade any non Elite at your location means she can trigger her ability off of an enemy engaged with someone else, either to ping it for damage and then maybe later have it engage with her, or for movement. Tony can't take the cat (events and skills only), but probably wouldn't anyway because his ally competition is fierce between Greg, Leo de Luca, and Lola Santiago (he loves sanity soak). Patrice can use the cat to auto-evade the Watcher officially now, though I've found Fire Axe to be a more well rounded solution, and while she doesn't have too much ally competition (Madame Labranche is really the only must have one) she doesn't want to include too many assets in my experience. — StyxTBeuford · 12720 2/15/20
I keep forgetting about Tony's restriction but I haven't played him. Isn't Patrice's asset issue the cost? I also haven't played her yet but her deckbuilding is quite interesting so I have looked at it a little. I could see some potential to use the Cat as a free action to evade and then fire - reload - fire the Ornate Bow for 6 damage (and no AOO) with Wendy/Rita but it would only work against non-elites with 4 or more health (or 5 or more with Rita). They exist but are somewhat rare. — TWWaterfalls · 847 2/15/20
The issue with Patrice is more actions. Between Violin and Labranche cost is not an issue at all. Events are nice because they’re often fast or at least have good icons. — StyxTBeuford · 12720 2/16/20
I guess it then becomes spend an action one turn to play it and save an action later. Not super strong though for her but possible. Yorick's actionless recursion really increased its value in that campaign. — TWWaterfalls · 847 2/16/20
While you can recurse it with Yorick, I think the main reason not to is that having Yorick to constantly evade is actively playing against his primary strength as a monster killer. He has access to 4 strength and a variety of very good tools for killing monsters, and he wants to do so so he can bring back tools. Each time you're using Stray Cat from the discard, you're giving up the chance to bring back something else, and you often need to deal with the monster later anyways. Yes, you can use Stray Cat to avoid one attack if things look bad - but you can effectively take the blow on another ally for similar effect (or better, if you're playing with Guard Dog or Aquinnah). — Ruduen · 722 2/20/20
You are forgetting about action efficiency and that everything doesn't need to be killed. If Yorick uses the Stray Cat 2-3 times during a scenario then he saves himself many actions. It will usually take him 2-3 actions to kill something since they are still tests that he can fail. That is 4-9 actions each scenario. Instead of spending 2-3 actions killing an enemy he can use the stray cat as a non-action, use the Flashlight (and combo Lucky/LWIF) to grab a clue or two and move to the next location and be closer to advancing the deck. It was quite common that Ursula and Yorick could clear clues fast enough that they could stay ahead of Hunter enemies. I really enjoy Guard Dog/Aquinnah (3) combo with Yorick but this deck flowed much better economy wise. I didn't even need to include ECache it worked so well. And he still killed 5-8 enemies each scenario so it wasn't like he was constantly tossing a cat at them but it saved a lot of actions for him and Ursula. — TWWaterfalls · 847 2/22/20