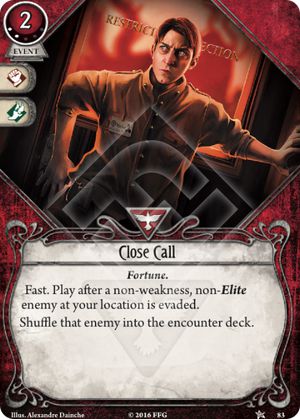 So amusing, just have a look at that disappointed security guard! Behold the moment, you won't see that often, because Close Call is a very situational inclusion in most decks. For Wendy, who has an abysmal Fight statistic, Close Call becomes a valuable companion, if you are willing to play with the things she is good at, instead of boosting the thing she hates to do.

For 2xp you get a unique ability that let's you finish some scenarios (see "Recommendations") with greater ease, in others it works like another copy of Backstab. You can not swap this event out with Adaptable, so an inclusion should be measured with your investigator's Agility and the cards in the deck supporting evasion attempts.

Synisill · 769
I wonder if youve missed what i suspect is the key point in this card. It converts an evade action into a pseudo kill, but basically one you cant or dont want to use on a boss/mini boss. In the same way Wendy uses backstab as an agi converter, this is essentially intended for any larger regular encounter deck enemy that is problematic to leave at a given location, hunters especially. Sure they`ll eventually come back out again but in wendy they would have taken several actions and likely a card or two to deal with. — StartWithTheName · 51946 6/12/17
@StartWithAName, I think i covered this point with the 2 questions one has to answer prior playing this event. I did not explain what this card does in particular, because i found it self-explanatory. — Synisill · 769 6/13/17
Yes i see what you mean. Sorry i actually like the review btw, I dont want this to sound like criticism. I guess im trying to help a little really. I think its describing the card as situational in the opening sentence that caught me off guard. Its clearly meant for wendy (who is form the pack it was released in) where it isnt situational at all, other than needing an enemy to kill. You could happily use this on a regular 222 or 333 enemy, or indeed keep it for bigger targets, hunters in particular since you cant just evade and ditch them in the same sense as non hunters. In Wendy it can be a staple if you want to go in that direction. I think it doesnt see much use because of the xp rather than being niche use. Ofc in other low evade chars its going to be situational, i would agree with you there certainly. Anyway. nice work on all these reviews btw. I dont have the time to read them all but youre really fleshing out the site for the new folk. Good one! — StartWithTheName · 51946 6/16/17
I would like to press the flesh with you for your nice commentary, you made me flush there. As a non-native speaker i have my difficulties to accentuate the important points at times, and i also lack the leisure to format my reviews as good as you do. I felt bad about my last comment and would have deleted it, if possible. It's crystal clear that your criticism was of a positive kind. I changed my wording to improve the review, thank you again! — Synisill · 769 6/16/17
5

It is still situational, but this can be interesting in Daniela Reyes. You trigger a attack with your Mechanic's Wrench, evade with your and then shuffle the enemy back to the Encounter Deck. What's best is that you don't even have to wait for your turn to do it.

It costs you an attack and 2 resources to send an enemy back into the Encounter Deck without spending a single action. Good to free your at the beginning of their turn to let them investigate at will, speed up a late scenario temple run, get rid of a Cultist full of doom, or an annoying Conglomeration of Spheres that steals your weapons without giving you a single Victory Point for this.

So, several cycles later, this card still isn't a must-have, but it's still good, if situational. The main use for it is dealing with enemies with either attachments or tokens that you want to reset: the most obvious is any kind of cultist picking up doom. In that sense, it has gotten competition in the form of Dumb Luck. Dumb Luck costs 0 XP and has arguably better skill icons, but there are still reasons to take Close Call.

For one, Dumb Luck requires you to be the one doing the evading. This is a bigger deal than it might seem, especially when coupled with the second problem, which is that you have to exactly fail by 1 or by 2. Technically you could fail by 0, I suppose. If you really need to get an enemy with doom off the table, having to figure out how to set up the "correct" failure can be a precious waste of time, especially if you accidentally succeed and have to engage the enemy again.

So far, I've mostly played Close Call near the end of the Forgotten Age. Especially in the scenario Shattered Aeons, being able to take certain enemies off the table for a bit can be a very needed moment of relief. And don't forget you can Close Call your fellow investigators' evades as well, so even someone like William Yorick or "Ashcan" Pete who might not be evading much could slot one or two of this in.

With the upgraded Dumb Luck now in play, I wonder if this card will get less use? Sure this one requires you (or someone) to pass an evasion and Dumb Luck (2) requires only you to fail one, but putting an enemy at the bottom of the deck for the same cost and fast action seems better than shuffling it into the deck, at least most times,

Krysmopompas · 290
I think that differentiation matters a lot less than you think it does. Tons of scenarios tell you to shuffle the encounter deck anyway, so the big difference between them is success vs failure. Stella wants Dumb Luck 2 more probably, while Rita wants Close Call more, as an example. Difficulty also factors in here. — StyxTBeuford · 12722 10/1/20
I would also quickly add that Dumb Luck 0 doesn't quite apply in the same way since the enemy only gets shuffled through if the shuffling happens that next mythos phase, so Dumb Luck 2 burying the enemy does matter in some way. — StyxTBeuford · 12722 10/2/20
Also, Dumb Luck (0) isn't actually bad. Think about it, you're getting the equivalent of evading an enemy (don't have to deal with it until the end of the turn) and then avoiding an encounter card during the next mythos (because you're drawing that enemy instead on an encounter). — Zinjanthropus · 209 10/4/20