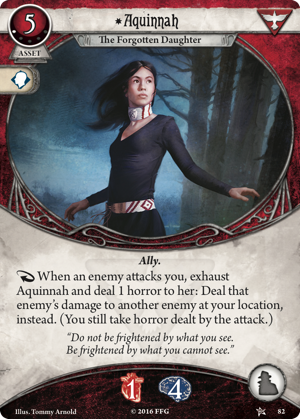 Sweet Aquinnah, i always wanted to welcome you and embrace you as a friend when embarking on a new campaign. You look absolutely gorgeous in your black dress and the neckband! Besides, you are so familiar with horrors of all kind, i really would side with you against the tides of darkness.... if you were not such a self-opinionated person!

Only the loneliest hermit would scrape together the sum to buy your company. Even then, you would not raise a finger to help your fellow in affliction, you would rather soothe him with eloquent words. Don't lose heart! Only in moments of utmost importance you are willing to bundle your mental powers to mesmerize a foe and make it attack one of his kind. Alas, most people disdain your laziness, yes, but me, myself, i would love to tease out your ability! Several times i tried, but you hoodwinked me all the time.

The basic version of Aquinnah(1) requires two or more enemies present at your location to trigger in the Enemy phase (Step 3.3). Furthermore, only the damage is redirected to another target, the horror still has to be dealt with. It's logical that enemies who inflict high damage also inflict high horror, so the investigator who uses Aquinnah has to take massive horror from the redirected slash. If the redirected slash does not suffice to kill the second enemy, the investigator has to take damage and horror from that second enemy's attack, too, if ready and engaged.

Since the experienced Aquinnah(3) has been released, i would recommend to buy the basic version only in case you plan to upgrade her and do not have the 3xp to spend in one go.