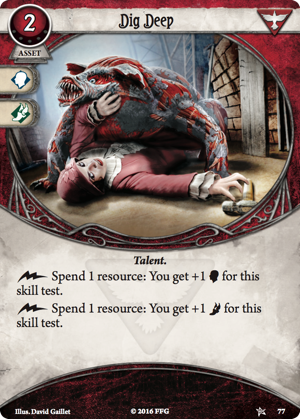 Physical Training, Hyperawareness, Hard Knocks, Arcane Studies, Dig Deep - they all have something in common: all these cards give you temporary boosts to individual skill tests at the cost of resources.

And as a general rule of thumb apply the following statements:

Rule 3. does not apply if you play on hard/expert difficulty, because there are frequently special chaos token rules that, if you failed, could bring very serious hindrances with them.

The inclusion of these cards is closely related to your investigator's economy. With the new card, Dark Horse, you may plan to stay poor as a church mouse and cards like Dig Deep can help you with that. Or, on the contrary, if you are living the dream, and some investigators proverbial float in resources, you can afford to bundle Hard Knocks+Arcane Studies or Physical Training+Hyperawareness to boost all your skills! In short, keep your hands off if you don't have action-free income!

Sadly, Dig Deep does not have a partner to go with, yet. All in all, you should very carefully plan the inclusion of this asset. One possible reason could be a special scenario with many and tests. It really depends on your playstyle and what you want to achieve.

Synisill · 731
The main problem with this talent, it does not help with the most common of tests (fight and investigate). So you're better of taking other talents or skill cards. — Django · 3425 6/1/17