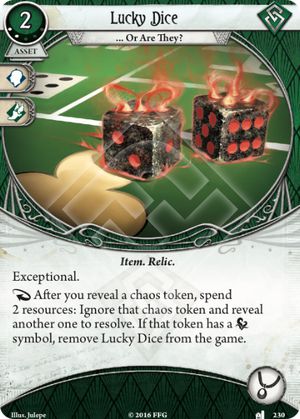 UPDATE after FAQ 1.1: The dice are great for investigators with an over-the-curve economy.

As some confusion has evolved around the mode of operation, here comes the link to a in-depth discussion with answer from Matt Newman.

Synisill · 769
When you need several Accessories, Relic Hunter (3 XP) is there for you. — Django · 4228 5/15/17
Did you notice that the Dice can be used multiple times per test so long as you have the creds and you dont draw tentacles on any draw (wendy tenticle replacement can block those as you say). This means it probably has a nice role in a Jenny deck where cash is a bit more abundant. — StartWithTheName · 51848 5/16/17
Thank you for mentioning it, i edited my review accordingly. — Synisill · 769 5/16/17
In combination with wendy, this is interesting. If wendy used the dice 3 times (-3; -4; auto fail) and then use her ability, she would only add the last token (auto fail) to the bag and could even continue using the dice. — Django · 4228 5/16/17
If you can trigger the dice off of itself, and since triggers are 'nested' does this mean you can draw the tentacles token (using the dice) and just draw again before the 'if this is tentacles' check fires? — Difrakt · 1146 5/24/17
@Difrakt No, you have to read the whole paragraph before using the <b>dice</b> again. So if you draw the tentacles token, you are forced to remove them. You can only avoid the resolving by <b>other</b> means, for example with Wendy's Amulet. — Synisill · 769 5/30/17
Sorry, Wendy's ability, of course. Or any other way that lets you ignore chaos bag results. — Synisill · 769 5/30/17
@synisill do you have a place in the rules where you can point to that indicates this is true? I've never seen anywhere in AH's or any FFG game where they consider paragraphs contextually relevant, and the ruling on nested triggers clearly indicates that you have to resolve triggering conditions before moving on to following sequences. In this case the new token pulled to resolve occurs in a separate instance from the trash trigger. — Difrakt · 1146 5/30/17
@synisill the "then" keyword has nothing to do with paragraphs. I see no reason why you could not use the dice to prevent their removal. The "Then" keyword has a specified meaning in AHLCG---the subsequent events do not occur until after all events of the preceding event are resolved. — FBones · 15670 5/31/17
Oops, sorry @synisill, I thought there was a "then" in the text that is not there. @Difrakt, synisill is correct, but it has nothing to do with paragraphs. It is a simple consequence of the "After" keyword. Look on page 10 of the rules reference under "Effects." All parts of an effect must resolve before things related to "After" text, so the dice cannot be used to save themselves because the effect of the first tentacles must resolve before they have a chance to be triggered a second time---and by that time the dice are no longer in play. — FBones · 15670 5/31/17
Is removed from the game untill the end of the current game or does it count for all the campain ? — catambroise · 1 6/3/17
@catambroise The removal is temporary only, until the end of the current game/scenario. It is still part of your deck and will be included if you continue a campaign. — Synisill · 769 6/7/17
Since FAQ v1.1 Wendy's ability doesn't work, as the removal of the dice cannot be ignored/canceled. — vidinufi · 55 10/6/18
0

For example, could Wendy Adams add this card to her deck, as she can only buy rogue cards costing up to 2 XP?