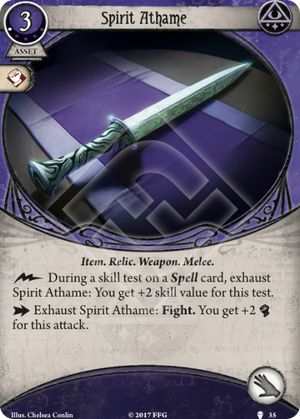 I have been guilty, gravely so, of underestimating this card. On its surface it doesn’t appear to do much, it’s in the growing list of +2 items which serve a secondary purpose, but in general without a +1 damage their function as weapons tend to be underwhelming. Even worse this card exhausts while fighting making it of even further limited use as a weapon

The +2 bonus is seemingly hamstrung by the same issues. The boost is only helping you with something you’re already good at, and still only once a turn. However in reality it’s a free, limited-scope guts every turn. Spread out over a whole scenario you’re looking at +10 or more, for 3r and an action. That’s some insane value and is almost guaranteed to save you a few tests if pulled early.

Note that it does compete with its hands-slot requirement. This isn’t so bad in Agnes, Akachi, Mystic Daisy or Sefina, but between his Trumpet and Grotesque Statue Jim may not be jumping to include a 4th and 5th hand item until mystic hand slot tech is printed. That being said the trumpet doesn’t show up in every game and it has good commit icons so there’s still justification if you only use the trumpet on occasion.

A solid, unassuming card that never steals the show but always has your back.

Difrakt · 1013
This and campaign allies like Lita might be used as backup.. — XehutL · 45 11/22/17
I used to think it's strong, for the reasons you pointed out. (Even with Lita, as a backup for fights.) But in the end, I removed one from my Agnes Deck and still wondering about completely cutting it from Sefina's fast improvements. Reason is : it boosts you at something you're already good at ! High level spells (which you want to buy as fast as possible) often gives you a natural +2/+3. And, with 4 or 5 base stat, it's unlikely that you will miss. Even if it were to happen, I prefer Holy Rosary or Peter S. (lvl2) to have a permanent boost. Only use I can see is in expert difficulty where +2 is nothing to look down at, even at 7-8. It other "fight" action is a big trap. Even with Lita. Basically, it gives you a +2 on something you might be bad at (Sefina is 2, Agnes is 2, Akachi is 3), so, you really might fail for good here. But... (3) cost means you could have played another damage staying power... Song of the dead isn't so good by itself, but is still better. All in one, I can only endorse Spirit Athame on high level difficulty. — Palefang · 53 11/28/17
3 years later, we are making our first blind run in TFA. @Palefang is exactly spot on, it boosts a stat you don't need to boost, and the secondary use is a trap. It should have been a good 0XP card to use with 0xp spells, but you'll prefer upgrading the spells instead of spending xp for this. Maybe taking 2 with Mateo at the start of a campaign, but ultimately it'll be replaced by more powerful cards. — NotSure · 7 2/5/21
2

Generally lackluster...but I'm gonna run this card with Favor of the Moon and the curse suite of spells Armageddon, Eye of Chaos, and/or Shroud of Shadows. The hand slot is uncontested for a battlemage, and the +2 skill value cancels out the modifier for the curse token you just released, while guaranteeing your bonus effect from the spell. Then you just pull a token like normal...should make 3-damage strikes (or 2-damage and a recharge) from Armageddon pretty reliable. It's just too bad that either use of the Athame causes it to exhaust, which interferes with repeated hits against a boss, or finishing off a mortally wounded foe. Still, it's a low-XP and only slightly janky way to "cancel" a curse token and gain a resource every turn...