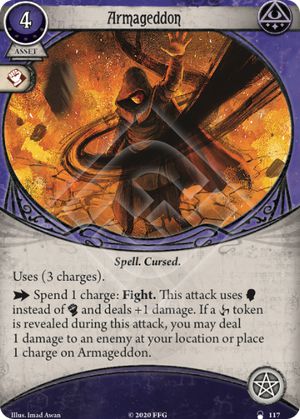 The fourth set of "will replacement" assets, Armageddon, Eye of Chaos and Shroud of Shadows.

The other sets are:

Shrivelling, Rite of Seeking and Mists of R'lyeh.

The similarities between the spells above and this new "cursed" spell set should be plain to see. however, ironically, the "cursed" spells dont have penalties for finding tokens, they are in fact a little bit more expensive, but in-turn they're safer and have bonuses on there!

Well. Safer is perhaps a wrong way to describe it, because playing with is plenty risky in of itself.

In order not to overcomplicate these reviews, I'm assuming you already know how good it is for characters to replace their into tests, pretty much every deck packs in several of these cards, sometimes doubling up for the sake of consistency (a clue focused taking both Rite of Seeking and Clairvoyance for example). This is the way to go for most mystics, with some rare and specific exceptions.

So why would you go for the cursed set?

The cards come hardwired with a higher cost, and a risk -> gains mechanic for tokens, so obviously you'll be plying the risky waters of in a bid for more power. Try to pack in some of the obvious combos to get running on that archetype, Favor of the Moon, generators wherever you can get them (a bit of a rarity in the card lineup, so look to your off-class cards or friends to do that with you).

The unique bit for Armageddon to deal 3 damage in a hit will definitely come in handy and save you charges in the long run. The starting point of 3 charges (compared to Shrivelling's 4, is why you really cannot play Armageddon outside of a curse build.

Dont forget, you need to actually beat the penalties so an even higher baseline of than usual, with Relic Hunter and multiple copies of Holy Rosary and/or Crystal Pendulum to launch your starting point into the stratosphere.

Lastly, remember to pack a bit more resources than usual, you dont want to be too impoverished to play or run your assets!

Is this way ot playing better than the older variants? I dont think so, especially on hard where penalties can be straight up untenable, but if you're able to consistently flex tokens and overcome the penalties you'll certainly be a bit more powerful, but those are big IF's.

Tsuruki23 · 2275
I think the upgraded Armageddon is potentially viable even if you're failing the test due to curse tokens. 1 damage per curse revealed. There could be an interesting Mateo deck based around intentionally failing Armageddon and Eye of Chaos tests with Prescient committed and Grisly Totem (3) active, in order to endlessly recur spells. In this case Favor of the Moon and Olive will work together to make sure you draw lots of curses and fail. — Zinjanthropus · 209 4/5/21
I feel like a Mystic/Seeker combo with Blasphemous Covenant might be the only way to make these work consistently. — housh · 141 4/5/21
1

The Fight version of Eye of Chaos, it has the same set of considerations as that card. If you are in a Curse-heavy environment, this might work out well. On the other hand, it's essentially a Shrivelling, where you pay an extra resource for one fewer charge and a slightly janky reloading mechanic. You also get to skip the horror ping for an unfortunate token draw.

It's worth noting that you don't cancel the Curse token, so your best case scenario is attacking at -2 hoping for 3 damage, which will get tricky with even 4 fight enemies unless you have some serious boosting or are throwing icons at the test (which is another cost). Maybe there will be a Level-3 version with a +2 bonus?

On reflection, Dexter could go heavy in this card suite with False Covenant and erase the negatives on the Curses. That's not a bad synergy.

LivefromBenefitSt · 910
My understanding is that cancelled tokens don't trigger "if revealed" effects, so False Convenant doesn't really synergize here. — Neofalcon · 8 11/12/20
This card says “If a Curse token is revealed,” and False Covenant says “When a Curse token is revealed,” so the Armageddon trigger would go first. — LivefromBenefitSt · 910 11/14/20
I'm gonna have to agree with neofalcon on this one. By your reasoning playing counterspell when attacking with shriveling would result in you still taking horror. FAQ on counterspell says otherwise. — Fishfreeek · 2 11/17/20
From "If" in the Rules section: "Some abilities have triggering conditions that use the words "at" or "if" instead of specifying "when" or "after," such as "at the end of the round," or "if the Ghoul Priest is defeated." These abilities trigger in between any "when..." abilities and any "after..." abilities with the same triggering condition." False Covenant's "when" would cancel before any "if" effects. — TheDoc37 · 462 11/18/20
It's also worth noting that the effect from drawing a curse token isn't adding 1 damage to the attack, it's immediately dealing 1 damage to any enemy at your location. That means three important things: you get to deal at least one damage even if the curse makes you fail, you can defeat two enemies (with 2 and 1 remaining health) in a single action, and similarly to Wither (4) you can sometimes make enemies leave play before the skill test concludes (which is most often relevant for Retaliate) — Thatwasademo · 44 12/23/20
0

This one is a whiff. Contrast to Eye of Chaos, which is basically an upgraded version of Rite of Seeking, this spell fails in nearly every way to supplant the gold standard Shriveling.

Eye of Chaos vs Rite of Seeking/Sixth Sense

-Similar resource cost. -Eye of Chaos is at default a "double success" like Rite of Seeking with 1 less charge and no downsides. -Unless you're playing TCU no downsides for failing a check (i.e. drawing six curse tokens on an investigate only benefits the spell, often hugely).

Armageddon vs Shriveling -Armageddon is more expensive. -Armageddon is at default a "single success" with a weapon, dealing 2 damage base. Shriveling however, deals 3. -Shriveling has a larger modifier for attack (+3 vs +2). -Unlike Investigation actions, many fight checks do have penalties for failing (i.e. Retaliate). So even pulling one curse token is going to start making you nervous with even the most hearty spell casters. You'll need to pull at least 2 for the effect to even matter on game state, default putting you at -4 starting out. -Steals curses from Eye of Chaos.

Overall, I find this spell is severely underpowered. Its almost useless on bosses because most of them have retaliate and if you power up the spell at all you're basically guaranteeing you'll get crunched, which mystics have minimal ability to survive. You could pair it with some evasion tool (i.e. sword cane) but then you're using two actions to attack, and of you don't pull at least four curse tokens you're still behind what you would have been with shrivelling.

As such, I tend to skip this spell and just run Shriveling with Eye of Chaos for curse based builds.

drjones87 · 65
You are not comparing like cards, matching Shrivelling (5) with Armageddon (4). You also ignore that Shrivelling (5) has a "bad stuff token" negative effect that can mess up a Mystics pretty quickly. Sure, you can deal 12 damage in 4 actions, but you can also take 8 horror in the process.In my experience, both Eye of Chaos and Armageddon require a bit of set up to really work. I used Luke with Blasphemous Covenant and Favor of the Moon, and it carried me through TIC pretty handily. The Curse spells are pretty fiddly, though, and depend on you ability to get and hold Curse tokens, which I can see some players not liking too much. I'm not in any great hurry to run them again, but I enjoyed the one attempt. — LivefromBenefitSt · 910 4/26/22
I imagine you meant to put this review on the Armageddon (4) page? — Soul_Turtle · 88 4/27/22
You're really undervaluinf Armageddon. It works really well in its intended deck. 1 less charge but you can get charges back easily, that's worth easily the extra cost it has. And as above, it's not a fair comparison in the first place comparing level 5 vs 4 spell. — fates · 18 5/8/22