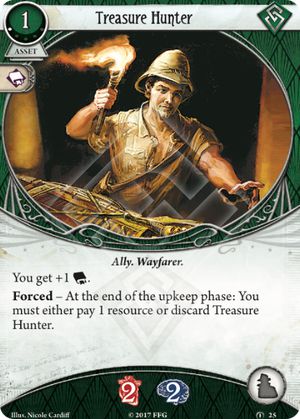 TL;DR: Leo Anderson might use it, particularly in solo, if you have a limited card pool and can't find better non-unique allies.

So the immediate comparison for Treasure Hunter one would make would be to Hired Muscle, an expensive, niche, hard-to-slot ally that is arguably only usable in Jenny Barnes or Leo Anderson.

Hired Muscle does have something going for it, however: it is one of a handful of assets that gives you a static +1 boost. That list, as of The Depths of Yoth, is:

Because is tied to Weapons, a static +1 boost is quite rare. So then you can think of situations where you really want that extra , like Shotgun Leo Anderson or Gambling Jenny with .41 Derringer(2), Lucky Cigarette Case, etc.

Treasure Hunter's +1 boost, however, is not rare at all. Dr. Milan Christopher, Magnifying Glass, St. Hubert's Key, Hemispheric Map, Alyssa Graham, Dario El-Amin, Lola Santiago, and sometimes Newspaper are probably the best examples. So if Treasure Hunter lacks the biggest selling point of a mediocre card, that pretty much makes it a bad card, right?

The last comparison to make for TH (and Muscle too) is the talents that give a 1-to-1 pump for that skill. If you had Hyperawareness, you'd spend 2 up front instead of 1, and then you'd spend 1 per check to get the same boost. If you're using more than 1/turn, then Treasure Hunter starts to look decent. That is offset by how it takes up Leo De Luca's ally slot, and how you don't need to spend the money on a Talent until you need to. Overall I don't think Treasure Hunter makes up for those downsides.

You could use it in Charisma Jenny with Dr. Milan Christopher for lolz though.

PureFlight · 583
I've really enjoyed this card in a dark horse wendy focused on investigation, the downsideof treasure hunter becomes a non factor and can help you empty your resource pool — aurchen · 1 11/10/18